Richard Rush, Who Directed ‘The Stunt Man,’ Dies as 91 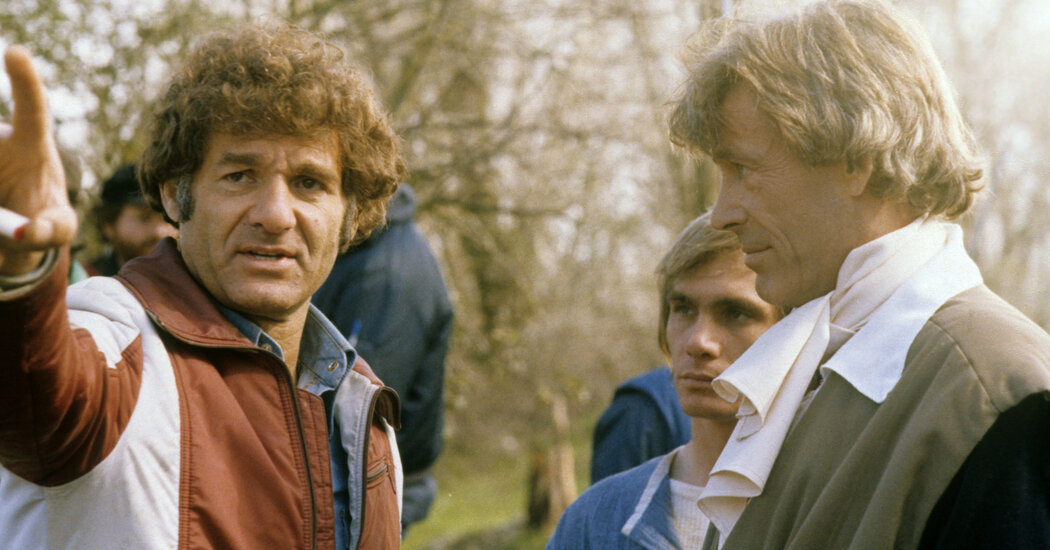 Richard Rush, who made rebellious-youth films in the 1960s that featured emerging stars like Jack Nicholson but who had his biggest success in 1980 with “The Stunt Man,” a quirky, expectation-defying thriller that gained cult status, died on April 8 at his home in Los Angeles. He was 91.

His wife, Claude Rush, said the cause was an accumulation of health issues that included heart and kidney failure. He had a heart transplant 18 years ago.

In “The Stunt Man,” Steve Railsback plays a fugitive who accidentally finds himself on a film set and ends up as a stunt man while striking up a romance with one of the stars (played by Barbara Hershey). Mr. Rush was nominated for an Oscar for directing and for the script, which he and Lawrence B. Marcus adapted from a Paul Brodeur novel. Peter O’Toole received an Oscar nomination for his bravura performance as the director who may or may not be trying to kill his new stunt man.

The movie is full of wild stunts and misdirection, keeping the audience guessing about what is real and what is movie-within-the-movie magic.

“We couldn’t wait to get to the set every day because we knew something exciting and creative was going to happen,” Mr. Railsback said in a phone interview.

Mr. Rush, in a 2017 interview with the blog We Are Cult, described what he was going for in the movie.

“I had the audacity to think that I could make a picture that would explore illusion and reality,” he said, “and I wanted to use the film as a mirror for the paranoid mind-set that we all live through at one point or another.”

If “The Stunt Man” and some of his other films were hard to classify, switching quickly from comedy to drama to romance, that was because reality was like that, he said.

“Living life is like falling down through a pinball machine, with balls bouncing off of each other, causing action and reaction in an unexpected way,” he told We Are Cult. “And that’s how I view storytelling: having that great balance of all the various elements. Something is allowed to be funny and serious sometimes within the same moment or scene.”

Richard Walter Rush was born on April 15, 1929, in New York. His widow said that his parents were Ray and Nina Rush, Russian immigrants, and that his father had owned bookstores in New York and Los Angeles, where the family settled when Richard was a boy.

During the Korean War Mr. Rush was part of a filmmaking unit in the Air Force, stationed in San Bernardino, Calif. After his military service he enrolled in a new film school at the University of California, Los Angeles.

His early films were generally low-budget affairs made quickly and aimed at the teenage market.

One of Mr. Nicholson’s earliest roles was in Mr. Rush’s first film, “Too Soon to Love” (1960), a drama about a teenage couple dealing with a pregnancy, a somewhat scandalous subject for the time. Mr. Nicholson was back in Mr. Rush’s biker picture, “Hell’s Angels on Wheels,” in 1967, two years before the better-known “Easy Rider” worked a biker theme with a cast that featured Mr. Nicholson, Peter Fonda and Dennis Hopper (who directed that film).

In 1974 Mr. Rush directed the action comedy “Freebie and the Bean,” with James Caan and Alan Arkin starring in an early example of the modern-day buddy-cop genre soon to spawn hits like “48 Hrs” and “Lethal Weapon.”

On “Hell’s Angels on Wheels” and several other movies, he worked with the cinematographer Laszlo Kovacs, who went on to a long and acclaimed career with credits like “Easy Rider” and “Five Easy Pieces” (1970).

Among Mr. Rush’s other movies were “Psych-Out” (1968), about a deaf runaway (Susan Strasberg) in the hippie heart of San Francisco, where Mr. Nicholson and Bruce Dern are among the populace; and “Getting Straight” (1970), with Elliott Gould and Candice Bergen, a film that Vincent Canby of The New York Times dismissed as “the worst of the campus-revolution movies.”

“Color of Night,” which starred Jane March and Bruce Willis, drew considerable attention both for its racy sex scenes and the dispute Mr. Rush got into with the studio over the editing. During arbitration with the studio, Cinergi Productions, Mr. Rush had a heart attack.

He also had an unpleasant experience with “Air America,” an action comedy for which he wrote a script that became part of a long developmental tussle. When the movie finally came out in 1990, it was directed by Roger Spottiswoode; Mr. Rush shared a screenwriting credit.

He married Claude Cuvereaux in 1995 after many years together. He is also survived by a son, Anthony, and a grandson.

Mr. Rush had definite ideas about the scripts he agreed to direct and how to shoot them. Mr. Railsback recalled that on “The Stunt Man,” the cinematographer, Mario Tosi, was taken aback by Mr. Rush’s hands-on style.

“Early on Richard would say, ‘Put your camera here, do this and do this,’” he said, “and Mario was getting upset because Richard was telling him where to put the camera and all this other stuff.”

But when the day’s footage (known as dailies) came back, Mr. Railsback said, Mr. Rush’s instincts proved to be spot on.

“Mario looked at the dailies,” he said, “and he walked over to Richard and said, ‘You just tell me where to put that camera.’”