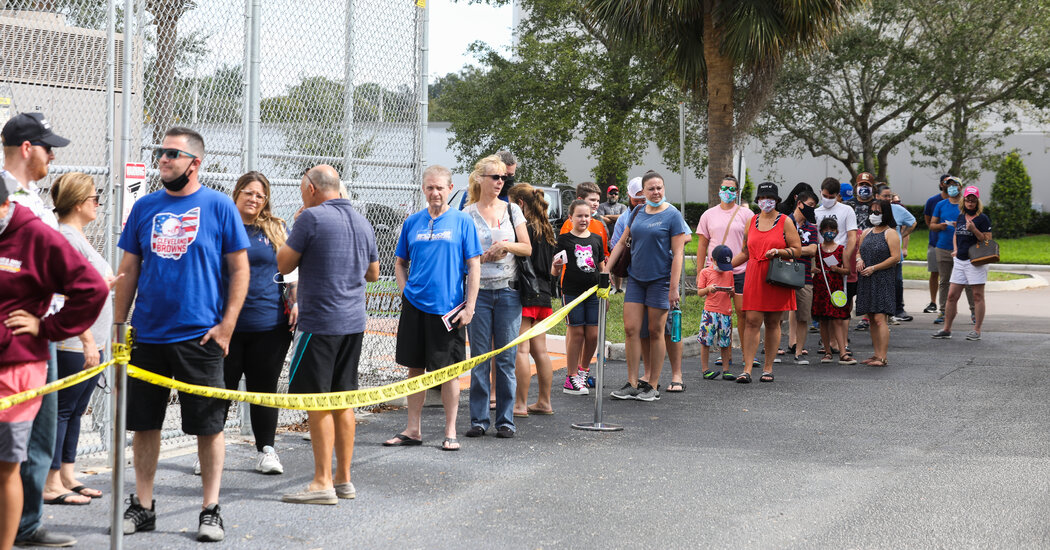 A bill that would impose a host of new restrictions on voting in Florida passed a key committee in the State Senate on Tuesday after a fiery debate among senators and hours of citizen testimony opposing the measure. The vote set the stage for a possible full floor vote in the Republican-controlled chamber in the coming weeks.

The bill, known as S.B. 90, had significantly been revised last week by Dennis K. Baxley, the Republican state senator who introduced it, to roll back some of the more strident restrictions in the original bill, like banning drop boxes. It passed the Senate Rules Committee on Tuesday along a mostly party-line vote, with one Republican member of the committee, Jeff Brandes, voting against it.

The measure also bans giving water to voters within 150 feet of a voting location; adds more identification requirements for absentee ballots; requires voters to request an absentee ballot every election rather than be on an absentee voting list; limits who can collect and drop off ballots; and empowers partisan observers during the ballot tabulating process.

Florida, a major political battleground, is one of a number of Republican-controlled states, including Georgia, Texas and Arizona, that have marched forward with new bills seeking to limit access to voting. Republicans did well in Florida in 2020, with former President Donald J. Trump winning by more than 370,000 votes.

Mr. Baxley, in introducing the bill, said that Florida’s election last year was the “gold standard” for the country, but that the new voting law was necessary to avoid potential problems.

But the successful election in Florida was the reason that Democrats, as well as at least one Republican, pushed back on a lot of the provisions in the law. The newly amended bill that was passed limits the availability of drop boxes to early voting hours, rather than the 24-hour option that existed last year.

Democratic senators, including Randolph Bracy, noted that there had been no evidence of any tampering with drop boxes, which was later confirmed in testimony by local election officials.

The Republican sponsor did relent on one provision: requiring a “wet signature” (one handwritten using a pen or pencil) on file for voters who cast their ballots by mail for signature matching, rather than digital signatures, many of which are collected at Department of Motor Vehicle offices around the state.

After intense debate and pressure, including from Republican senators, Mr. Baxley said on Tuesday morning that “by listening to others, and understanding your heart, I’m willing, and this Senate is willing, to take it out.”

The bill was originally set for a vote last Wednesday, but the debate ran past the allotted meeting time and was abruptly gaveled to a close. The Senate Rules Committee picked up the final debate early Tuesday.

During the public testimony last week, dozens of Florida voters spoke against the bill, as well as some local election officials, who took particular issue with the provision granting more authority to partisan poll watchers.

Mr. Brandes, in his closing remarks on Tuesday morning, noted that election officials across the state had voiced opposition to the bill.

“I need to put on the record that to my knowledge, not one Republican supervisor of elections in the state of Florida supports this bill in its current form,” he said.

The lengthy debate last Wednesday grew heated at times, as Democrats grew frustrated with what they viewed as evasive answers from Mr. Baxley.

“These are the most nonsensical, off-point answers I think I’ve ever heard to questions in my life,” said Gary Farmer, the Democratic minority leader in the State Senate.

The bill that passed through committee on Tuesday brings the Senate effort more in line with a similar bill that has been introduced in the House by Blaise Ingoglia, a Republican representative from the Gulf Coast. The House bill, which passed a key House committee in March, also awaits a full vote later this month.

The Florida Legislature is in session this year only through the end of April, so any bills will need to be passed by both chambers before May 1.