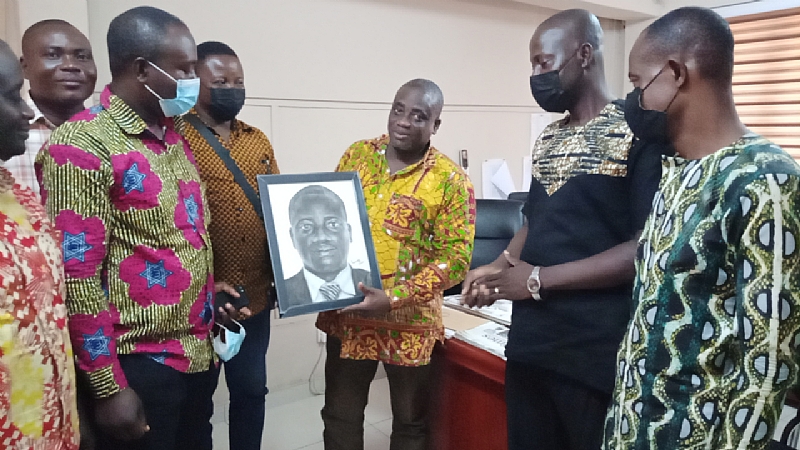 Zonal Organizing Secretaries of the Greater Accra School Sports Association (GASSA) on Tuesday, April 20 paid a surprised courtesy call on the newly appointed National Physical Education and Sports Coordinator, Michael Ntow Ayeh to congratulate him on his appointment to the position and also discuss issues pertaining to the return of School Sports.

The former Greater Accra Regional P.E Coordinator, Ayeh, ascended to the national portfolio by dint of hard work and his colleagues (Zonal secretaries) decided to pay an unannounced visit to express their readiness to support him.

“it has been a while since somebody was picked from Greater Accra to mount this highest position. It is a joy to us and we have nothing to honor you at the moment but rather to come over and express our joy and also to congratulate you for the feat that you have chalked. In ensuring that you succeed at this position, we have to continuously support you, because we don’t see you as a national officer but as one of us. So, we have come, to show our solidarity, our appreciation, and show you that we are happy about what the Lord has done.”

“Quite recently, GOC also went for an Election, and God being so good, he was again elected as a member of GOC. And we want to congratulate you on that as well.” He added.

Mr. Ayeh, who was last month was elected unto the Ghana Olympic Committee Board as part of the ‘three other members elected by congress’, couldn’t also hide his joy on the visit by his guest.

He was however positive that School Sports will return as soon as possible as there are ongoing discussions.

“In fact, I wasn’t expecting you people. It has been a surprise to me. I am happy you are here today. We are trying to bring back School Sports. We don’t need to be telling all what we’ve been doing behind the scenes. But I have met the Minister, the NSA, the Chief Director, and Regional P.E Coordinators to brainstorm to see what we can do for the return of School Sports. We are also pushing for annual programs, 1 for basic and 1 for the Second cycle. I have had discussions with some companies and it is very fruitful. So, let’s hope that when the green light is given, we will be able to have a lot of competitions to unearth talents.”

“I only want to ask, that you people work very hard. Because the more the children are active, it helps them fight anything that endangers the system.” He concluded.

Some Senior High Schools have been given green light to begin training as government plans to ease restrictions on Sports in general, with the Covid-19 decrease, especially in the schools.

The Team before departure, presented to the PE Coordinator, a beautiful pencil portrait picture frame of himself.

Much hasn’t been heard from him due to the surge of Covid-19 which hit the country in early 2020 and consequently the restriction of School Sports.