My Boyfriend Has Two Girlfriends. Should I Be His Third? 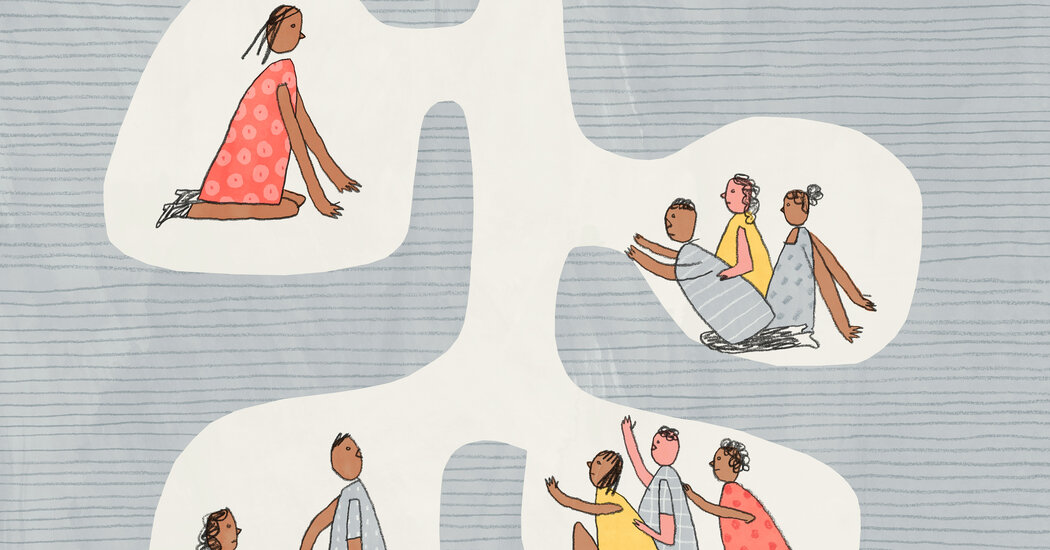 I had been wandering the liquor store for some minutes when the clerk approached and asked if I needed help. I considered presenting my situation.

“Hello,” I would say. “I’m wine shopping for dinner with my boyfriend and his two partners, whom I’ll be meeting for the first time. You wouldn’t happen to stock a white wine that says, ‘I’m sorry, please like me?’”

The clerk smiled and ambled away.

Dating someone who was already in established romantic relationships did have its perks. Having already navigated the tricky terrain of polyamory for years, Juhana was an excellent communicator and emotionally literate — a stark contrast to monoamorous men I had dated before. Also, I didn’t want to surrender time from my projects or friends, so it was a relief to have the relationship constrained to specific days of the week: Mondays and Thursdays, when Juhana’s live-in partner had regular plans.

On these days I would sometimes visit the apartment they shared, an airy flat in a woodsy suburb of Helsinki, where the windows overlooked a sea of trees. There, Juhana would cook for me. He was the type who shopped for flavored salts at specialty stores and sharpened his own knives, which he would use to mince and crush garlic into paste.

I could tell he was proud of this skill, as if it was something that marked adulthood proper, acquired just beyond a bridge that I, at 27, had yet to cross.

[Sign up for Love Letter, our weekly email about Modern Love, weddings and relationships.]

Though his partners weren’t there, they weren’t entirely absent, either. We ate our tofu burgers at a table between his live-in partner’s self-portraits and his second partner’s plants, which, arranged in a messy line, extended their branches at me, wilting.

Between bites, Juhana told me his partners had made fun of him for talking so much about me. “They asked if I’m planning to bring you over for dinner soon. To show you off.”

I flew past the question with a light laugh. My intentions weren’t very serious. I doubted that Juhana’s partners and I would ever meet.

Until one day when he looked up at me from the armchair in my room, where he liked to sit and read, and said: “Damn, I suppose I’m falling in love with you.”

As if his words were a chemical catalyst, my visions of our relationship began to metamorphose from restaurant outings and casual trips to us building a home.

These visions invariably did not feature his partners, who were becoming increasingly difficult for me to ignore. They popped up in conversation. Pictures of them dominated Juhana’s phone. Sometimes one of them would call while he was with me and, after some conversation, he would lower his phone and say, “She says hello.”

I stared back at his expectant face, mute. What could I say? “Hi, I don’t know you, but I am in bed with your boyfriend. I fantasize about him leaving you. I am jealous. I wish you didn’t exist.”

Saying anything else felt disingenuous, so I said nothing. Gradually, since their well-meaning messages went unanswered, they stopped.

I often wondered what was wrong with me. Excepting some religious texts — and the romantic literature that populated my bookshelf — where was it universally decreed that a loving relationship could only involve two partners? Tentative research suggested children raised in stable “polycules” fared well. People in open marriages gave optimistic, enlightened interviews. Statistics on cheating seemed to support the notion that humans, much like the vast majority of the animal kingdom, were not “rigged” for exclusivity.

Although my mind accepted this reasoning, my heart — propelled by the Austens and Brontës of my bookshelf — rebelled.

Why had the polyamorous community rephrased the rush of falling in love as “new relationship energy” (NRE for short)? Why would anyone endeavor to rebrand love into something like a start-up, complete with its own energized, abbreviated lingo? And how could Juhana encourage me to pursue other relationships? Did I truly inspire so little emotion he wouldn’t care if I dated someone else?

“I am willing to endure the discomfort,” he would reply, “because you are worth it.”

But why couldn’t he be willing to endure the discomfort of depriving himself of someone else? Why, I wanted to know, was one pain fundamentally more acceptable than the other?

After a particularly turbulent week, as we lay emotionally spent on my futon, I asked Juhana what his partners thought about me. He hesitated.

“Well, mainly they are just happy we found one another,” he said. “But they are a little more wary now. They are afraid that maybe you are manipulative.”

I reprised all the ideas I had of myself — adventurous, open-minded, creative. It stung to have Machiavellian added to that list.

“I think I would like to meet your partners,” I said. “Maybe we could have that dinner sometime? I’ll bring the wine.”

“They prefer white,” Juhana said. He knew, given the choice, that I would opt for red.

Which is how I ended up in that liquor store, staring through gleaming rows of bottles imported from Chile and South Africa. My situation felt like another foreign country, in whose territory I had stumbled, felt stupid, and gotten lost.

I imagined the dinner. Would they circle each other’s waists as they fetched plates from the kitchen? Would they face me in a row, as if for an interview? Would his partners wear lipstick, laugh at my jokes, serve dessert? Would they, as in my recurring nightmare, slowly look me over and turn to Juhana, as if to ask: “Her?”

Afterward, I would try to cobble together an understanding of what it all meant, and what I wanted. Maybe I would understand what love really was — whether it meant holding on or letting go.

You see, there was a period early in our relationship when Juhana questioned whether he was polyamorous after all. Perhaps the intensity of his feelings, his single-mindedness, meant something. “If I were free,” he would say, “would we be exclusive?”

He toyed with this idea for weeks, expressing hope that a lightning bolt of clarity would at some point galvanize him into making a choice. But no such miracle came.

Juhana was religious where I was not. I thought often about how he said he sometimes struggled with his faith, but ultimately, daily, made the choice to believe.

Why, I wondered, wasn’t this choice also applicable to love?

In the end, the dinner never happened. A tentative date was set and then postponed because of a scheduling conflict with his second partner. Christmas came and went. I broke up with Juhana and drank the wine I had bought for the dinner. White peach, apricot, Netflix, heartbreak.

Weeks later, we spoke. Juhana had come to the conclusion that the disposition for poly- or monoamory was something innate, like sexual orientation. Perhaps it was even genetic, the way monogamous prairie voles and their promiscuous cousins, the meadow voles, had differing amounts of oxytocin emitters or vasopressin receptors in their brains.

“We just wouldn’t have worked out because we are too different,” he said. “I am polyamorous, and you are monoamorous. It’s not anyone’s fault.”

But my own love seemed less like something grounded in science and increasingly like a faith. It wasn’t that I couldn’t love multiple people simultaneously, but that I wouldn’t. Not because I thought it was ethically wrong or impractical or too difficult, but because it was sacrilegious to the idea of love I possessed.

Where polyamory recognizes the beauty of a pantheon of partners with whom you can express different facets of yourself, a monoamorous, monotheistic view elevates one lover above all others.

Disciples of both faiths submit to a degree of suffering: the polyamorous must deal with jealousy, infinite scheduling and complex interpersonal dynamics, and the monoamorous must accept a lack of diversity and newness and the gravity of commitment in a culture of too much choice. Perhaps for those of us who aren’t voles, the defining prerequisite for preferring and thriving in any form of relationship is simply to believe in it.

I don’t think I would have discovered at the dinner whatever I hoped I would, just as no lightning bolt of clarity ever appeared for Juhana. There are no answers in love, I think. Only choices made in the absence of objective truth.