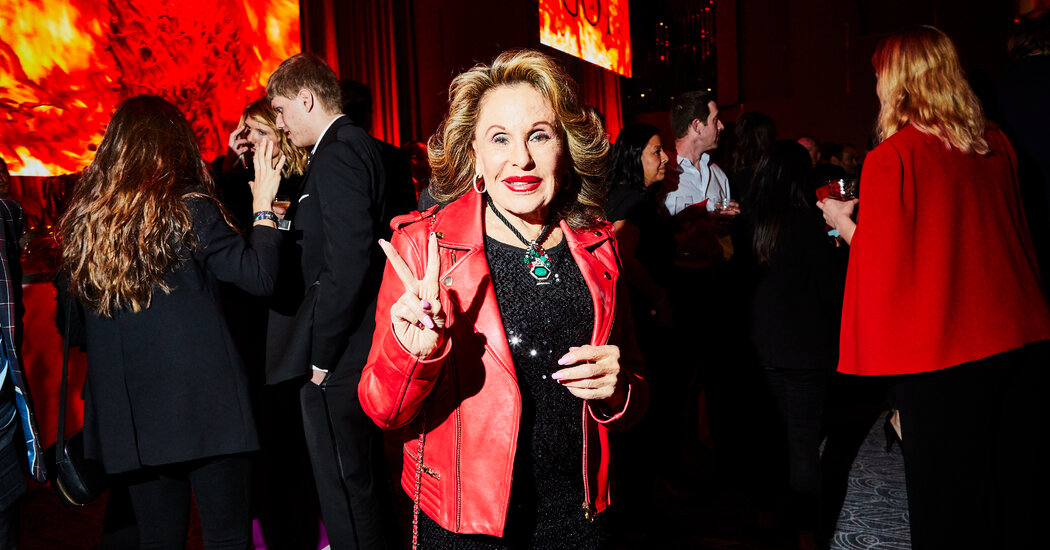 With the New York charity circuit on hiatus, here is how some philanthropists and society figures are spending their time and resources during the pandemic.

Where have you been sheltering?

I live in a high-rise in the Wilshire Corridor in Los Angeles. I can see the golf course and, to the east, the snow-capped mountains. I get up every morning and I get dressed. I’m in full makeup every day.

Actually, I’m wearing a robe. I just got out of the bathtub. I’m working on my party. We’re going to celebrate my 80th birthday on May 17 at the Beverly Hills Hotel. I’m not shy about anything and definitely not shy about my birthday.

Neither age nor the pandemic have put a dent in your plans.

I’m thrilled every morning. I look at life as a positive. I’m not waiting for things to clear up or go by. You’ve got to seize the moment.

You seem to be doing just that.

I’m going to bring out a product. It’s the Star Shooterz, an iPhone case with a selfie stick that lets you take the perfect selfie. I have “The Nikki Haskell Show” on Amazon, with episodes of my talk show that first ran in the 1980s. The show was almost like a melting pot. I became friends with most of the people I interviewed— Clive Davis, Neil Sedaka, Robert Wagner, Joan Collins.

Why would an audience tune in now?

We have lived in a year saturated with disastrous news. We’ve been at a standstill culturally. People think, is there anyone out there that is fun? We lived through the most fabulous time in the ’80s. The baby boomers were opulent. They wanted to have a good time, travel the world, wear beautiful clothes, not black tights and a black T-shirt with a sweater wrapped around the waist. If you ever found me in an outfit like that, you’d know I was kidnapped.

What are some of the show’s highlights?

We shot a lot at Studio 54. We talked to Andy Warhol, Liza Minnelli Calvin Klein. I was the first person who interviewed Donald Trump in the Trump Tower, during the groundbreaking. Actually, Donald told me in those days that he wanted to be president.

You voted for him. You’ve maintained a friendship with the Trumps. Has that cost you?

I’ve had turmoil. But my political affiliations have nothing to do with my friends. You have to stand up for what you believe in. I don’t apologize for anything.

Favorite Charity: the Cooper Union for the Advancement of Science and Art

Where have you been sheltering?

A couple of years ago I purchased a 1971 Norman Jaffe house on the Long Island Sound. We were out there, my wife and two boys who are 4 and 8, from March until summer. Now we’re back in our apartment in Williamsburg. Most years, I traveled about half the time. Now I get to spend a lot of time with the kids. I’m also painting and drawing. Sometimes drawing is a way for me to understand and unpack my work in different ways.

One of your works is on view at the LongHouse Reserve, which reopened this month in East Hampton. Please tell us about it.

It’s a 12-foot-tall bronze work cast from the Venus de Milo. The bronze has a patina, so it looks like it’s been sitting there for many years, and it’s clustered with crystals.

How does it relate to your body of work?

I try to make my work float in time a little bit, so that it feels linked to now, but could also be from the past or the future. Giorgio di Chirico, an early favorite artist of mine, included ancient works in his painting but placed those in very modern scenarios. They could have been made any time in the past hundred years. I like that.

You have worked in the fashion world. What drew you?

Fashion is a very different way of creating meaning, creating value. A lot of clothing that I wear is vintage. I have a pretty substantial sneaker collection that dates back to the mid-’80s. Clothing gains character through the user, and it’s very much tied to the zeitgeist. A lot of artists try to escape their era, to create a timeless work. To a certain degree, that’s impossible.

Has the pandemic changed our perception of time?

For a lot of us, living through it felt very long. Now looking back, it feels very short. So many of us can remember exact moment when we were told we had to go into lockdown. We have a visceral sense of that moment. It can still feel very present. That the normalcy of everyday life can be so dramatically altered in the span of a day or a couple of weeks — few generations have experienced that.

Where have you spent the past few months?

I live in Garrison, N.Y. We moved out here five years ago. I can see from our window that spring is here. The forsythia is all around us, electric yellow, on the streets, around my neighbors’ houses. I’m looking forward to the swallows coming back. Last year they came on Earth Day. I wondered if they were going to fly in on the same day.

Sounds idyllic. What are you doing for fun?

We live right on the Appalachian Trail so we hike a ton. I’m doing my garden — you know, tackling all those middle-age pursuits.

You’ve worked as an artist, on your own. Did that alone time prepare you for lockdown?

No. One of the reasons I didn’t pursue art ultimately was that it was so solitary. I like the collaboration of the designer, patternmaker, manufacturer and the wearer all coming together. Still, with the solitude, we’ve learned as a business that maybe the rigor of 9 to 5 doesn’t have to be there.

There must have been challenges.

It was scary from the business side. We had to think about closing the store for a time, about absorbing inventory. We’d been shipping from our warehouse in Brooklyn, but the warehouse closed. Last year we did a sample sale out of our garage. I liked packing orders that had color, prints and sequins. It gave me hope. I’m good at working. It’s my therapy. Maybe I’m twisted that way.

You have a new pop-up store on Smith Street, in Brooklyn. How is that working out?

The first people to come back were the seniors because they were vaccinated. “Oh, we’re so excited,” they told me. “We haven’t been out in a year.” We’re putting together a new model for showing artwork, a shop within the shop, with installations by friends including Chelsea Spengemann, Gwen Smith and Sara VanDerBeek.

What looks are people craving?

People are starting to buy shoes again. My retail director tells me that they’re buying belts. They’re showing their waists — a sign things are changing.

What will you be wearing?

I’m excited for high heels. I’m not dying for a miniskirt, but I’m not afraid of it either. What we’ve learned is that clothes can really bring you joy.

Interviews have been edited.