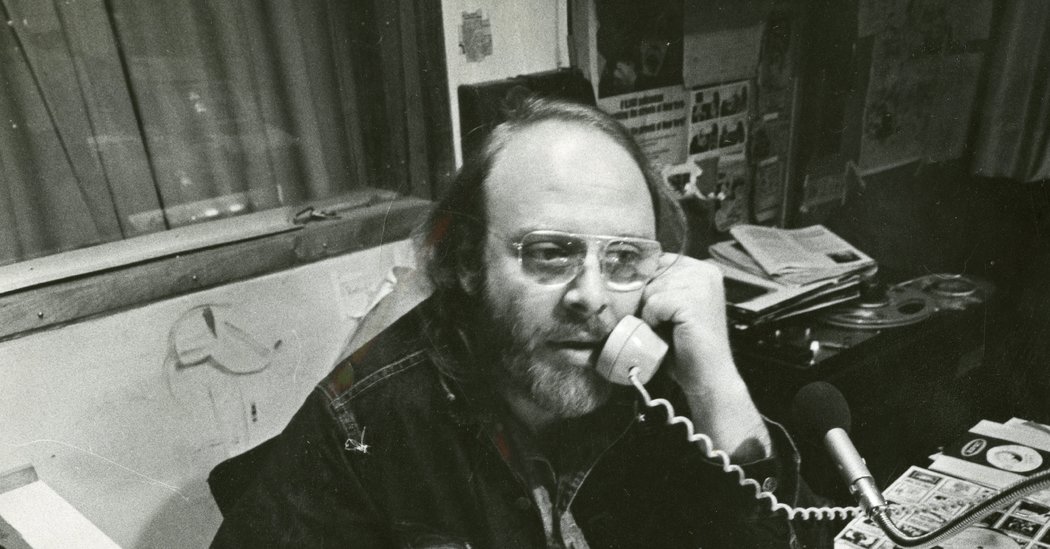 He finally accepted an unpaid offer to do his show once a week on WFMU, a noncommercial New Jersey station. The station let him retain his “Radio Unnameable” format, but it did not have the New York City audience he craved. He was miserable until WBAI took him back in 1982, although the station no longer granted him five nights a week, and in 2006 his airtime was reduced to once a week.

In 2018, Mr. Fass suffered a fiasco not unlike those he used to hear about from distressed late-night callers. While he was moving his belongings from his home in Staten Island to a house in Danbury, Conn., he flicked on a malfunctioning gas fireplace and set off a two-alarm blaze. Mr. Fass, who was using a wheelchair, had to be carried out by the movers but inhaled a good deal of smoke. Scores of tapes of shows that he had held onto were damaged.

“I could have been roast D.J.,” he told a reporter.

The move to Connecticut ultimately fell through, and Mr. Fass and Ms. Tofte, his only immediate survivor, moved to North Carolina. (His first marriage, to Bridget Potter, a former vice president for programming at HBO, ended in divorce.), He continued to do a weekly three-hour midnight show from there until recently.

Unlike Jean Shepherd, another free-form pioneer, Mr. Fass rarely mined his childhood for on-air material, so listeners did not know much about his origins. He was born on June 29, 1933, to Jack and Nancy Fass, children of Jewish immigrants — his grandmother knew Emma Goldman — and was raised in Brooklyn. His father was an accountant.

A shy, socially uneasy boy, he was drawn to acting, and after graduating from Syracuse University, he studied with Sanford Meisner and Sydney Pollack at the Neighborhood Playhouse and took workshops with Stella Adler. He had small roles in productions of Brendan Behan’s “The Hostage” and “The Execution of Private Slovik.” After an Army tour in the mid-1950s, he appeared in the original Off Broadway production of “The Threepenny Opera,” with a cast that included Lotte Lenya.

It was during the empty hours at an Army base in North Carolina that he became an obsessive radio listener, tuning in on a transistor radio while lying in his bunk. In 1963, a high school friend, the poet Richard Elman, helped him get a job as an announcer at a WBAI. He was given a midnight slot that had been largely unfilled until then.