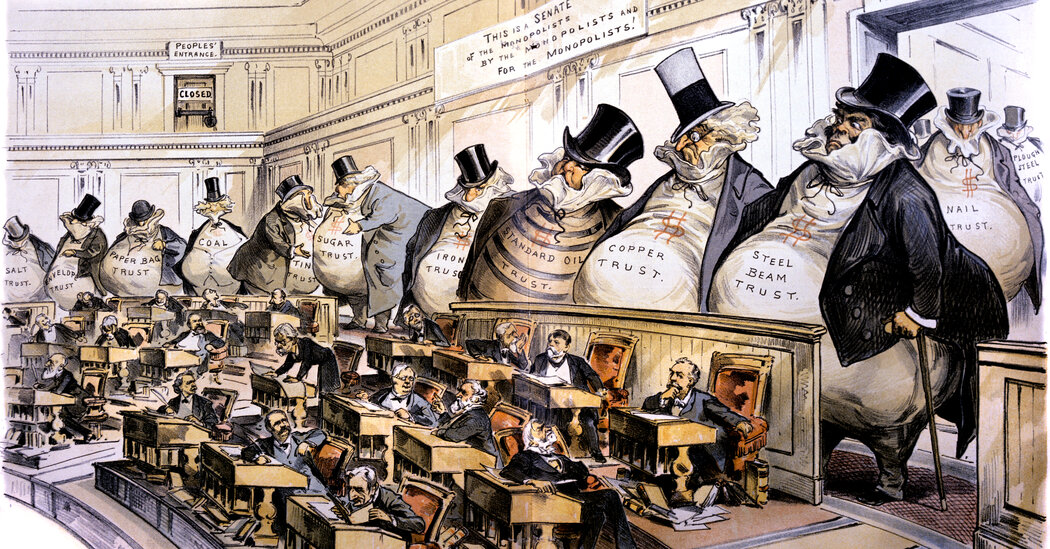 Over the last decade, the handful of technology companies that have grown to a gargantuan size have fueled concerns among lawmakers on both sides of the aisle over the power wielded by these behemoths. Senator Amy Klobuchar of Minnesota, chair of the Senate Judiciary subcommittee on antitrust, has emerged as one of the most vocal critics in Congress of the power of big tech. She has championed the effort to revamp antitrust law, the primary weapon we have for combating excessive concentrations of economic might.

Antitrust is an unusually arcane area of the law, not easily accessible to a wide public. In response to this gap and to provide a narrative backdrop to her current legislative efforts, Klobuchar has written “Antitrust: Taking on Monopoly Power From the Gilded Age to the Digital Age.” A history of antitrust policy may not sound like the most compelling raw material for a page turner. But the book is an impressive work of scholarship, deeply researched — it has over 200 pages of footnotes — highly informative and surprisingly readable in the bargain.

As a good Minnesotan, Klobuchar traces the roots of antitrust to the Midwest, when farmers rebelled at the end of the 19th century against the exploitative practices of the railroads. The movement spread from the Prairie States to Washington, D.C. Many industries at the time were controlled by business combinations known as trusts. There were trusts in petroleum, meatpacking, railroads, sugar, lead, coal, whiskey and tobacco. By restricting competition the trusts not only hurt consumers and workers and damaged the functioning of the capitalist system, they also came to be seen as a threat to American democracy itself. The battle to break them up became a highly visible feature of American political life in the late 19th and early 20th centuries. Politicians of both major parties campaigned against “monopolies” and “big business combinations.” The Sherman Act of 1890 (enacted with almost unanimous support in both the House and Senate) and the Clayton Act of 1914 remain today the primary weapons against misuse of corporate power. In the years from 1901 to 1914 the federal government brought some 120 suits against so-called monopolies, including the well-known suit to break up Standard Oil. Whole industries were restructured and the industrial landscape transformed by government action.

The great virtue of Klobuchar’s history is that it takes us back to the formative years of antitrust, when the operating rules governing American capitalism were still very much in flux. It is a reminder that the way industries are organized and markets allowed to function are not determined by inexorable forces outside our control but are matters of social and political choice.

After 1920, antitrust policy moved from the political hustings to the more subdued setting of the courtroom. It lost much of its moral energy and over the next 50 years enforcement of antitrust laws waxed and waned depending on economic circumstances. During the New Deal, for example, the otherwise progressive Franklin Roosevelt administration, fearing destructive price competition would lead to widespread bankruptcies, adopted a policy of promoting “fair” competition and industry-government cooperation rather than breaking up monopolies.

In the early 1980s, as part of the wider conservative revolution in economic thinking about government intervention, a consensus emerged that the dangers of monopoly power had been vastly overstated. The central figure behind this change — and the primary villain in Klobuchar’s telling of the story — was Robert Bork, the enormously influential legal theorist from Yale, whose nomination to the Supreme Court was rejected by the Senate in 1987. He argued that the governing principle for judging competition should be whether consumers were harmed in some way. It was a doctrine that became a cornerstone of American antitrust policy for the next 30 years.

Bork’s ideas led to a decline in antitrust enforcement actions and were predictably accompanied by greater consolidation and increased concentration within industries. Klobuchar produces much evidence that the ascendancy of this policy coincided with all sorts of negative economic trends: greater inequality in income and wealth, a stagnant middle class, low wage growth and a decline in investment and innovation. The difficulty is that during this 30-year period there were so many other dramatic changes at play in the economic environment (globalization and automation) and in economic policy (lower tax rates and deregulation) that it is hard to know how much of the deterioration in economic performance is truly attributable to reduced antitrust activity, as Klobuchar contends.

With the recent change in the political mood about big tech, we do seem to be entering a new era of more activist antitrust policy. In the last two chapters of her book Klobuchar has put together a 25-point action plan to reinvigorate antitrust policy. She recommends dusting off the existing legislation on the books, more vigorously enforcing it, adding more resources to the federal agencies charged with applying antitrust laws and toughening the standards for approving mergers. There is little to argue with here. Nevertheless, it is hard to believe that this is all it will take to arrest and reverse decades of growing corporate power and fundamentally change the economic landscape in the United States.

Antitrust policy, since its very inception, has been dogged by a fundamental dilemma. What to do about private corporations that grow disproportionately large, not through predatory means or by using tactics that are deemed illegal by the Sherman or Clayton Act but by simply taking advantage of economies of scale inherent in many technologies? Take Google. It has come to control about 90 percent of the market for search activity in part because of the enormous economies of scale associated with networks. Or consider Amazon. It has grown gigantically by simply being more efficient, providing its customers enormous selection and low prices.

The early advocates of a vigorous antitrust policy like Woodrow Wilson, under the influence of Justice Louis D. Brandeis, would have favored breaking up gigantic companies simply because of the dangers that such concentrations of power pose to the foundations of democracy. Their modern-day disciples have added another twist by arguing that even if consumers seem to be benefiting in the near term, the harm from excessive size cannot be judged simply by its immediate effects but has to be assessed by its longer-run effects on the vibrancy of competition.

That other great champion of the struggle to tame excessive corporate power, Theodore Roosevelt, despite his great reputation as a trustbuster, in fact grew to doubt the efficacy of promoting competition. Under the influence of Herbert Croly, a Progressive Era intellectual, he came to believe that the trend to greater size in industry was an inevitable consequence of technology and that the resulting gains in economic efficiency had to be harnessed for the benefit of the nation. He argued that the best counter to the power of big business was the power of big government. Rather than breaking up giant corporations, he advocated regulating them.

Klobuchar has probably exaggerated the adverse consequences of the last 30 years of laissez-faire policy toward corporate power, and the same reasoning causes her to overstate the potency of reversing it. Perhaps she should temper her enthusiasm, evident throughout this book, for Woodrow Wilson and his zeal for a vigorous antitrust policy, and rebalance it with some of Theodore Roosevelt’s skepticism.