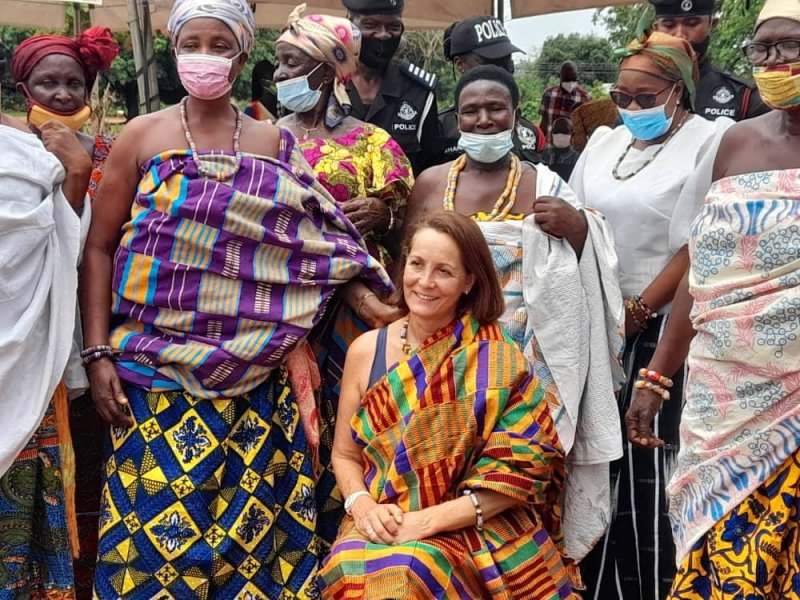 The Chiefs and people of Hani in the Tain District of the Bono Region on Monday, installed Madam Anne Sophie Ave, the French Ambassador to Ghana, as the Nkosuahemaa (Development Queen) of the town, under a stool name “Nana Benneh III”.

The chieftaincy title, according to the Queen-Mother of Hani, Nana Akua Takyiwaa, was in recognition and appreciation to the Ambassador’s immense contributions towards the development of the town, particularly, promoting the indigenous culture of the local people.

At a colourful ceremony held at Hani, Nana Takyiwaa said the traditional title will established a perpetual bilateral relationship between the Embassy and the people and prayed the relationship would be nurtured and strengthened for mutual benefit.

“We strongly believe this bond would also go long a way to deepen the existing bilateral relationship between Ghana and France for the benefit of the two countries,” the Queen mother later told the Ghana News Agency (GNA) in an interview.

On her part, Madam Ave expressed her heartfelt gratitude to the chiefs and people of the town for the honour, and assured the Embassy’s commitment to help promote and sell the cultural heritage of the people.

The French Embassy funded, renovated and transformed a library built in 1974 into a community museum, under the Begho Area Archaeological Project (BAAP).

It also contains other prehistoric artefacts such as micro-lithic tools, stones axes, and rasps all recovered from Mumute site in the area which dates to 1500 BC.

Speaking in an interview with the GNA, Mr Daniel Kumah, a Lecturer, Archaeology and Heritage Studies at the University of Ghana, explained that he initiated the BAAP in 2016 to help safeguard the archaeological sites and promoting tourism in the area.

“Our intention was to examine the ancient town of Begho, currently known as Hani, archaeologically and further interrogate its importance during the trans-Saharan trade”, he explained.

Mr Kumah, later led the Ambassador and her entourage to some archaeological sites in the area, commended the Embassy for supporting the renovation works, saying the museum would greatly help showcase cultural heritage of the people and boost eco-tourism in the area.