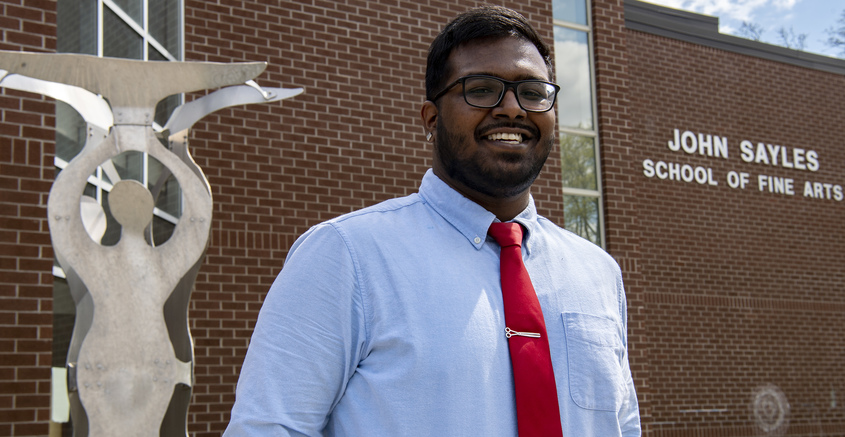 When Travis Ghirdharie started a fellowship working at the Schenectady City School District central office in August 2019, he hoped to get to the bottom of a vexing question: How many students of Guyanese descent attend Schenectady schools?

The eldest son of a Guyanese immigrant family that settled in Schenectady in the early 2000s, Ghirdharie returned to the city with a Cornell University diploma, multiple years of experience teaching in a New York City charter school and a burning desire to help improve his hometown.

He joined the district through a Lead for America fellowship, which aims to place young leaders in their hometowns in jobs on community-building projects. The two-year fellowship, which wraps up in August, enabled Ghirdharie to work with district officials, families, students and other key players in the community.

He serves as the district’s point person for Yates Village families dealing with the transition in and out of their homes during a massive reconstruction of the housing development on the city’s Northside. He helped establish participatory budgeting programs at a slew of elementary schools, giving students a direct say in how their school’s resources are used. And he has laid the groundwork for Union College to host another fellow tasked with coordinating citywide collaborative initiatives that unite Union, the city, the school district and other community agencies.

“Schenectady needs more young people of color, first-generation [college] people who have grown up here, doing this work in Schenectady,” said Ghirdarie, who graduated from Schenectady High School in 2013.

“That number could be higher,” he said.

And while his initial interest was to get a better picture of the district’s Guyanese students, Ghirdharie said the same problems exist for all types of students. The census-based demographic categories listed on the district’s registration forms, put simply, do not capture the true racial, ethnic and cultural makeup of Schenectady students.

“It paints a poor picture of our schools’ population,” he said.

The simplified — and often misleading — categories that limit choices to Black, white, Asian, multiracial and a small handful of other identities do not give many Schenectady families an option they can relate to.

“We can mark our box for Asian, but that doesn’t tell the whole story,” Ghirdharie said, expanding on the diversity of identities within the broader umbrella of Guyanese descent. He said Guyanese families may be Indo-Guyanese or Sino-Guyanese or Afro-Guyanese.

“Am I Black-Caribbean?” he asked rhetorically, summing up the complexities. “It’s not just the people that look like me who are Guyanese.”

Ghirdharie has been working with district officials to develop new options on the registration forms in hopes of gathering a more representative demographic picture of the school community, which will help district leaders and educators as they work to connect with students and reflect student culture and identity within the school curriculum and culture.

“This work isn’t just for Guyanese students,” he said. “This research will serve all these different groups of students.”

‘Different than the city’

Ghirdharie said many people in his family began to make their way to the U.S. in the late 1980s and 1990s. His dad landed in Queens in 1989, and his mother moved there in 1990. They later met and had Travis, the oldest of three children

In May 2002, then-5-year-old Ghirdharie and his family moved north to Schenectady from Queens — “On God’s back,” was how his grandma described Schenectady’s location, he recalled. He said he remembered the magazines his parents had from visiting Schenectady a few times before they decided to move for good. An aunt and uncle moved to Schenectady around the same time as they did.

The family moved to the Bellevue neighborhood — a new immigrant family on the block, one of the few with young kids.

“It was different than [New York City],” he recalled. “There was parking on the street. There was quiet at night.”

He attended the International Charter School of Schenectady until it closed at the end of his seventh-grade year, transitioning into the city school district in eighth grade. One day while Ghirdharie was sitting in his architecture class at the high school, school counselor Earl Barcomb came knocking to invite Ghirdharie to join the Sponsor-a-Scholar program, which pairs promising students who would be first-generation college students with mentors, tutoring, scholarships and other supports. Ghirdharie said the program sounded too good to be true, and his father cautioned that it could be a “scam,” but it ultimately opened the door to new opportunities.

In 2013, he graduated from Schenectady High School and went off to college at Cornell. Ghirdharie said his parents’ decision to leave New York City for Schenectady opened the door to opportunities he would not have had as one of a million students in the city.

“So many people have grown because of Schenectady, and I know I would not have been afforded as many opportunities if I was in New York City,” he said. “I got to grow here in a different way than I would have been afforded in Queens.”

Standing outside the high school recently, Ghirdharie and Barcomb reflected on some of the cultural norms within the Guyanese community, including an emphasis on family, and an adherence to hierarchy and deference to authority.

“”You don’t ask questions, you do what you are told … you work,” Ghirdharie said, summarizing a conflict inherent in that approach to education. “To do the best learning you can, you have to ask questions, think critically, ask: ‘How can we make things better?’ ”

They noted that for many families of Guyanese descent it can be difficult to envision a child going far away for college.

Barcomb said he remembered having one student of Guyanese descent when he started working at the high school in 1995. Now, Barcomb proudly displays in his office a Guyanese flag a former student gifted him, and he yearns to visit Guyana at some point. Like Ghirdharie, some of Barcomb’s former students have begun to return to work in Schenectady, a cohort raised in Schenectady ready to play leadership roles in their community.

Ghirdharie hopes to set the table for others to follow in his footsteps. After meeting with Union College officials to brainstorm ways to better coordinate collaboration between the district and college, Ghirdharie helped initiate a broader meeting with city officials and other community groups. They decided to solicit another fellowship position through Lead for America that would be sponsored by Union. The position will work to facilitate initiatives that bring together different agencies and organizations across the city. The application is open until next month.

“After COVID, we have so many people in our community doing amazing things. Sometimes we are doing double work,” he said. “In order to really realize the systemic change we need in Schenectady, we need to collaborate as institutions.”

The path of a student of Guyanese descent can also be fraught with misconceptions and outright racism.

Ghirdharie remembered being told in high school: “You aren’t really Guyanese because you are smart and go to class.” He said he was sometimes called an “Oreo” — as in, white on the inside and dark on the outside. At one point he told someone his family was from Guyana. Their response: “ ‘Wait, you mean Ghana?’ ” he said, a common occurrence among people who confuse Guyana in South America with Ghana in Western Africa.

Ghirdharie said hearing or being told things like that negatively shapes your own perceptions about culture and identity.

But he also recognized how his own perceptions of his former classmates have evolved as his understanding of education systems has increased. “Growing up here, I said these kids don’t want to do the work, don’t show up to class,” he said. His experience in college and working in Teach for America, he said, showed him that larger forces fueled the reasons so many of his classmates did not succeed in the school system.

“At the end of the day, it’s a system of failure,” he said of education systems broadly.

After he completes his fellowship in August, Ghirdharie plans to study how to replace the city systems of failure with systems that work for the people they are attempting to serve, as he pursues a master’s degree in public administration at Syracuse University.

But he also plans to return to Schenectady when he finishes. Why?

“My family is here,” he said. And his Schenectady roots give him a special ability to work constructively in the community. “People buy into that, and I get a lot more credibility from people.”

More from The Daily Gazette: