Theater to Stream: A Musical Throwback and ‘The Normal Heart’ 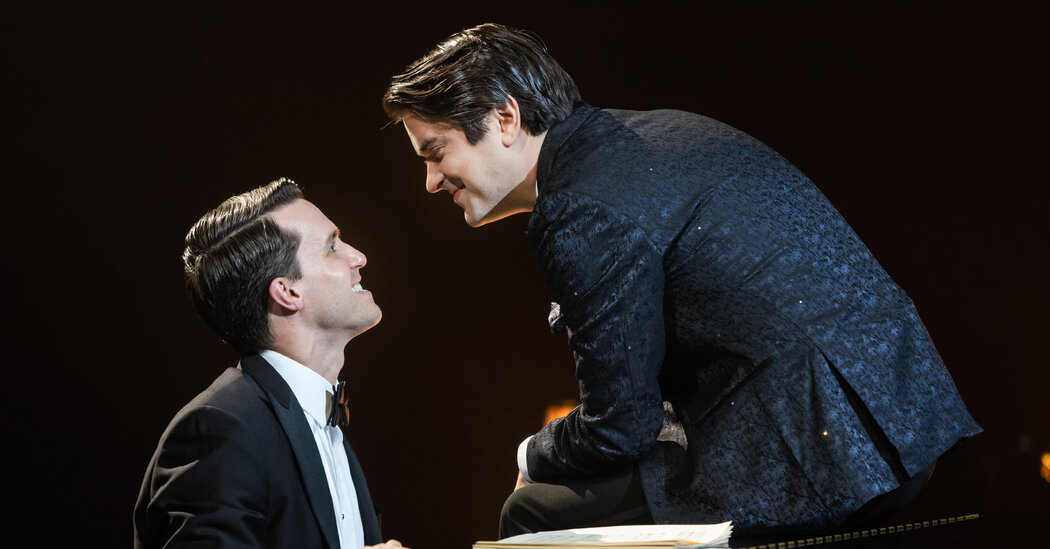 In 2018, New Yorkers in the know were buzzing about a new musical at the tiny York Theater. That show, Mark Sonnenblick’s “Midnight at the Never Get,” was subtly daring and thought-provoking, underneath a conventional, even old-fashioned exterior. Thanks to a streaming production from the Signature Theater in Arlington, Va., it should reach the greater audience it richly deserves.

Set in 1960s Manhattan, the intimate musical follows the wistful romance between a cabaret singer, Trevor, and a songwriter, Arthur, as they try to come up with a hit act while staying true to themselves. What, for example, should they do about the pronouns in their love songs? Sonnenblick’s original numbers, which brilliantly emulate a vintage sound, are perfectly executed pastiches that also stand on their own. Sam Bolen, who was in the York production and created the concept with Sonnenblick and Max Friedman, returns as Trevor. April 30-June 21; sigtheatre.org

‘We Have to Hurry’

Here’s an intriguing pairing: Elliott Gould and Kathleen Chalfant as flirting Florida retirees, in a new play by Dorothy Lyman. (Ever busy, Chalfant will appear in a live production of Karen Malpede’s “Blue Valiant” at a Pennsylvania art farm May 29 and 30.) Gould got his start in Broadway musicals, so with a bit of luck he’ll break into song. A girl can dream. May 1 and 2; broadwayondemand.com

Nilaja Sun wrote and performed in this solo play, from 2006, based in part on her eight years of teaching in the New York City public school system. Now, the Arden Theater Company in Philadelphia is staging it with Taysha Marie Canales, who handles all the characters — students, teachers, janitors and more — orbiting the fictional Malcolm X High School as they try to put on the Timberlake Wertenbaker play “Our Country’s Good.” April 27-May 9; ardentheatre.org

‘50in50: Shattering the Glass Ceiling’

For the fifth anniversary of its “50in50” monologue series, the Billie Holiday Theater in Brooklyn wrangled a stunning lineup for this anthology of stories read by Black actresses — Marsha Stephanie Blake, Marla Gibbs, Sanaa Lathan, Audra McDonald, Anika Noni Rose, Gabourey Sidibe, Wanda Sykes, Vanessa Williams and many, many others. May 6-9; thebillieholiday.org

The performer Melissa Errico and Adam Gopnik, a writer for The New Yorker, conclude their collaboration at the French Institute Alliance Française with a livestreamed (then on-demand) concert dedicated to the dark universe of noir fiction, more specifically its back-and-forth between the United States and France. The songs, featuring Tedd Firth on piano, include David Raksin and Johnny Mercer’s “Laura” and the premiere of Gopnik and Peter Foley’s “We Live, We Love, We Lie, We Die.” The first two installments in Errico and Gopnik’s series, “Love” and “Desire,” are still available to stream. May 6; fiaf.org

This one is by appointment only, so mark your calendar for the ONE Archives Foundation’s reading of Larry Kramer’s “The Normal Heart” with — deep breath — Sterling K. Brown, Jeremy Pope, Laverne Cox, Jake Borelli and Danielle Savre, among others. The foundation supports the ONE National Gay & Lesbian Archives at the University of Southern California libraries — said to be the largest of its kind in the world. Paris Barclay directs. May 8; onearchives.org

‘The Waves in Quarantine’

When Lisa Peterson and David Bucknam’s adaptation of the Virginia Woolf novel premiered in 1990, The New York Times wrote that the book, score and lyrics were “suffused with a Woolfian intensity and intoxication.” Now Peterson directs a revised, virtual version that she conceived with the actor Raúl Esparza, with additional music by Adam Gwon. In addition to Esparza, the cast includes Carmen Cusack, Nikki Renée Daniels, Darius de Haas, Manu Narayan and Alice Ripley. April 29-May 28; berkeleyrep.org

In “Bring Me to Light,” Sutton Foster’s on-demand concert at New York City Center, she covers a decent amount of Broadway ground. A six-time Tony Award nominee and two-time winner, she will swing from golden oldies from “Camelot,” “Oklahoma!” and “South Pacific” to excerpts from lesser-known shows, including “Anyone Can Whistle,” “Violet” and Andrew Lippa’s “The Wild Party.” April 28-May 31; nycitycenter.org

There’s no rest on the virtual cabaret stages this month. John Lloyd Young is letting fans choose the songs for his “By Request” concert at the Space in Las Vegas. There is a 99 percent chance that they will select something from “Jersey Boys,” for which Young won a Tony in 2006. May 1-9; thespacelv.com

In New York, Feinstein’s/54 Below is covering different bases and constituencies with Jeremy Jordan’s “Carry On” (May 6-June 17) and Marilyn Maye’s “Broadway, the Maye Way” (May 8-June 19). 54below.com

The Goodman Theater in Chicago is out with two productions staged by Robert Falls, its artistic director. First is “Measure for Measure,” from 2013, a tale of bad hypocrisy and even worse policing that might feel resonant these days (through May 9). Next, Falls tackles a livestreamed staging of Adam Rapp’s “The Sound Inside,” a two-hander — in this case Mary Beth Fisher and John Drea — that has turned into a pandemic staple thanks to its relatively simple logistical demands and suspenseful pace (May 13-16). goodmantheatre.org

‘Eurobeat: The Pride of Europe’

The Will Ferrell movie “Eurovision Song Contest: The Story of Fire Saga” introduced many Americans to the glories of the title’s Pan-European competition. If you want to warm up before this year’s edition, May 18-22, stream an update of a revival, which The Guardian called a “sparkly, spandex-clad, bad-taste extravaganza” when it ran in the West End in 2008. In the Eurovision context, this description amounts to high praise. And yes, viewers can vote for the outcome. April 30-May 10; stream.theatre