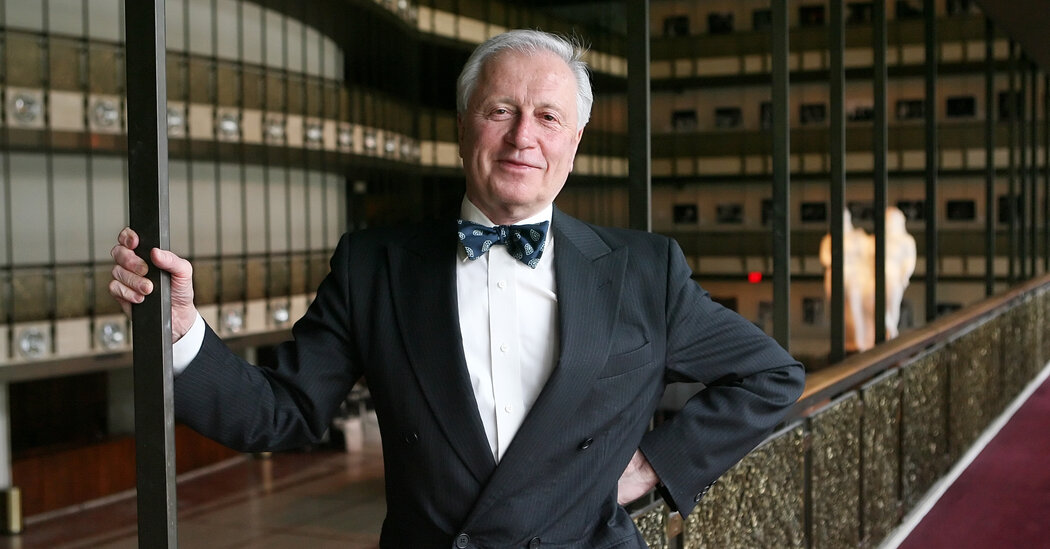 Paul Kellogg, an innovative impresario who led the Glimmerglass Opera in Cooperstown, N.Y., and later, during a dynamic and financially precarious period, also led the New York City Opera, died on Wednesday at a hospital in Cooperstown. He was 84.

His death was announced by the Glimmerglass Festival, as the company is now called. No cause was given.

Mr. Kellogg was living on the outskirts of Cooperstown and trying to write a novel when in 1979 he was the unexpected choice to become the executive manager of the four-year-old Glimmerglass Opera, which presented productions in the cramped, acoustically dry auditorium of Cooperstown High School. Though an opera lover, he had no real training in music and scant managerial experience. Yet he immediately envisioned what this fledgling summer festival could become.

“A summer festival is not only what it does artistically, it’s what it provides people in the way of a full experience,” he said in a 1993 interview with The Christian Science Monitor.

He courted local patrons and found support to boost the programming from one or two productions every summer to, eventually, four. He took on increasing executive and artistic leadership as his title expanded over the years. From the start, along with staples, he presented unusual fare like Bernstein’s “Trouble in Tahiti” and Mozart’s “The Impresario.” Believing in opera as a form of engrossing contemporary theater, he engaged important directors, including Jonathan Miller, Mark Lamos, Leon Major, Martha Clarke and Simon Callow.

Most important, he oversaw the construction of a near-ideal house: the acoustically vibrant 914-seat Alice Busch Opera Theater, which opened in 1987 and boasted a large stage, ample backstage area and a proper orchestra pit. The theater, designed by the architect Hugh Handy, was perched in the middle of 43 acres of former farmland near Otsego Lake, about eight miles north of Cooperstown. And the side walls had screens that let the breeze inside, though sliding wood panels were closed over them when the music started. The bucolic setting and the splendid house became a magnet for audiences.

In a surprising move, the New York City Opera in 1996 announced that Mr. Kellogg would become its general and artistic director — succeeding Christopher Keene, a beloved conductor, who had died the previous year — while remaining with Glimmerglass.

The companies were very different operations. At Glimmerglass, which was essentially a nonunion house that relied heavily on interns, the budget for four productions during the 1995 season was about $3.5 million. City Opera during the 1995-96 season was presenting 114 performances of 15 productions, on a budget of about $24 million.

Mr. Kellogg made the companies creative partners. New productions were introduced at Glimmerglass, where rehearsals took place in festival conditions, and then later presented at City Opera with the same or similar casts. Both institutions had demonstrated commitment to innovative contemporary productions, offbeat repertory and overlooked 20th-century works, and both had cultivated emerging singers who, while they might not have been stars, had fresh voices and often looked like the youthful characters they portrayed.

For a while City Opera prospered under this arrangement. Mr. Kellogg presented 62 new productions there, about half of which had originated in Cooperstown. Among them were Carlisle Floyd’s “Of Mice and Men,” with the tenor Anthony Dean Griffey in a career-making performance as the slow-witted Lennie, and the director Francesca Zambello’s compellingly updated, emotionally penetrating staging of Gluck’s “Iphigénie en Tauride,” starring Christine Goerke in the title role.

Still, City Opera was encumbered by the spotty, dull acoustics of the 2,700-seat New York State Theater (now the David H. Koch Theater), which had been designed to meet the needs of the New York City Ballet. In 1999 Mr. Kellogg, in a controversial move, announced that a subtle sound enhancement system was being installed at the theater to enliven the acoustics.

Opera was an art form that had gloried in natural voices for centuries, and many felt the company had started down a slippery slope. Even Beverly Sills, once City Opera’s greatest star and a former general director, went public with her dismay.

Mr. Kellogg, like City Opera leaders before him, argued that the house was not a second-tier company in the shadow of the Metropolitan Opera but a vibrant institution with a distinctive mission and repertory. He came to view relocating to either a renovated or new house as the only way to fulfill that mission.

Yet, in explaining the deficiencies of the company’s home to lure financial backing for his dream, he inevitably undermined outreach to audiences: Why should people attend performances in an inadequate opera house?

Several plans were considered and abandoned as financially impossible. Mr. Kellogg pledged to keep searching. It was not to be, and in the end, partly because of Mr. Kellogg’s heavy spending, City Opera spiraled into deeper trouble after he stepped down.

Paul Edward Kellogg was born in Los Angeles on March 11, 1937. His father, Harold, who had studied singing with the great tenor Jean de Reszke, worked at 20th Century Fox teaching voice projection and diction. His mother, Maxine (Valentine) Kellogg, was an accomplished pianist.

After his family moved to Texas in the late 1940s, Paul majored in comparative literature at the University of Texas in Austin, then continued his studies at the Sorbonne in Paris and at Columbia University in New York. In 1967 he was hired as a French teacher by the Allen-Stevenson School in Manhattan. He went on to become the school’s assistant headmaster.

After Mr. Kellogg moved to Cooperstown in 1975, his partner (and later husband), Raymond Han, a noted sculptor and painter, was recruited to work on sets for a few Glimmerglass productions. Mr. Kellogg volunteered to handle props. Company officials came calling in 1979 with a bigger job.

Under Mr. Kellogg’s leadership, Glimmerglass took its place among the leading summer opera festivals. He started a young-artists program so emerging singers could receive expert coaching and gain experience onstage. Between Glimmerglass and City Opera he had a solid record of fostering news works, among them operas by William Schuman, Stephen Hartke, Robert Beaser, Deborah Drattell and Charles Wuorinen.

He made a crucial contribution to the development of new operas through Vox: Showcasing American Composers, an annual program begun in 1999 that presented free readings with top singers and the City Opera orchestra of excerpts from operas that were in progress or unperformed. These invaluable readings led to dozens of premieres elsewhere.

But City Opera’s acclaimed work kept draining the budget and punishing the endowment. After widely reported problems with deficits and declining attendance at City Opera during Mr. Kellogg’s final years, he retired from both companies in 2006. City Opera collapsed in 2013. (A new team under the City Opera name has been presenting productions and attempting to resurrect it.) Glimmerglass continues to thrive under the leadership of Ms. Zambello.

The defining moment of Mr. Kellogg’s career came just four days after the terrorist attacks of Sept. 11, 2001. City Opera had been scheduled to open its fall season on the evening of Sept. 11 with a grim new production of Wagner’s “Flying Dutchman.” At the behest of city officials, the company opened with a matinee performance of the Wagner on the 15th instead.

Nervous audience members wondered whether it was even appropriate to be at the opera. Then the curtain rose to reveal a large American flag hanging above the stage and, standing closely together, almost every member of the company: singers in costumes, administrators in business attire, stagehands in dusty jeans and T-shirts, and Mr. Kellogg, in the middle. The performing arts, he said in a quavering voice, have many functions: “catharsis, consolation, shared experience, reaffirmation of civilized values, distraction.” So, he added, “We’re back.” Everyone in the house joined in singing the national anthem. Then Mr. Kellogg, engulfed in hugs, led the City Opera family offstage and the performance began.

Suddenly, thoughts of budget deficits, declining patronage and an inadequate house were pushed aside. That performance that day, under that leader, truly mattered.