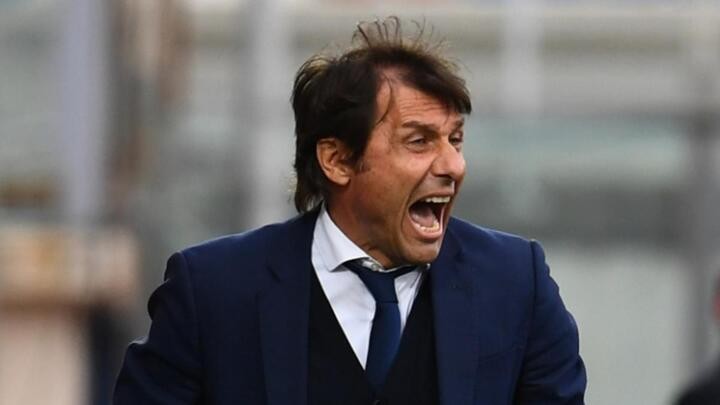 Antonio Conte says his Inter side have improved in every department as they approach the finishing line in Serie A.

Inter players have formed a “team of granite” and will deservedly take their place in the club’s history, according to head coach Antonio Conte.

The Nerazzurri overcame Crotone 2-0 on Saturday – a result that relegated Serse Cosmi’s side – and they will end an 11-year wait to win a Scudetto if second-placed Atalanta fail to win at Sassuolo on Sunday.

The runaway leaders had been frustrated against Crotone, twice hitting the woodwork before Christian Eriksen put them ahead in the 69th minute.

Achraf Hakimi added a second in stoppage time as Inter moved to within touching distance of the Serie A title.

Conte is thrilled with his players’ efforts this season and says they deserve all the plaudits that will come their way when they end Juventus’ nine-season dominance of the Italian top flight.

“I think our campaign comes from a constant growth from the team in every area, including mentality, the sharing of a vision and experiencing it intensely,” he told Sky Sport Italia. “Those who play or are on the bench have formed a team made of granite.

“We know that we can remain in the history of Inter because we are effectively bringing down a nine-year reign. This is satisfying and the players deserve congratulations.

“We needed to go through this journey in order to win and be considered winners. There are sacrifices to be made, a culture to be developed, and at times giving up so much in order to achieve something extraordinary.

“Not everyone is prepared to do that. I found many players here who all wanted to get on the same boat and work together to become part of Inter history.

“I told the players, ‘if you win, then you’ll be in the history of this club. If you don’t, then you can spend three, seven or more years here and be just one of the many.’

“I didn’t have to convince them very hard; they were already on board.”

Inter close in on title

While Inter can be crowned as early as Sunday, Conte suggested he would prefer his side to seal the triumph themselves when they face Sampdoria next weekend.

“We know that we’re on the verge and are quite relaxed about it,” he explained. “I don’t think it’s right to depend on someone else. We’ve got such a big gap that we know it’s all our own work and we don’t have to thank anyone for a result. It’s all still in our hands.”

Conte faced some hostility when he took over ahead of the 2019-20 season given his association with Juventus, for whom he both played for and coached with distinction.

The 51-year-old acknowledged it has been a challenge at times but believes he has done enough to win over any dissenting supporters.

“I made the most difficult choice by coming to Inter,” he said. “Many would’ve hidden behind history, but I love a challenge and came here to challenge myself.

“I remain a fan of every club I worked for, but I am the ultimate fan of the club where I work right now, always. I realise it wasn’t easy for me to enter the hearts of all Inter fans, but I have always given my all for the team I work for.

“I think I really challenged myself this time and I am rewarded with a team that is doing something extraordinary.”