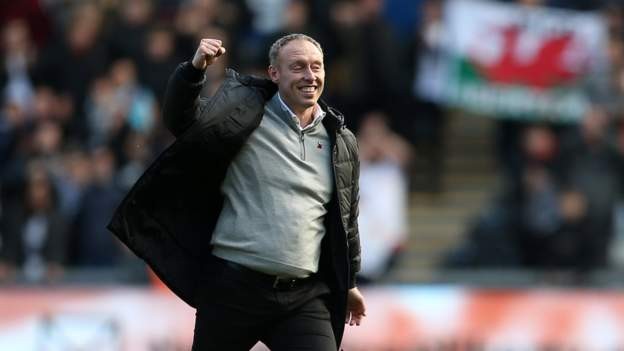 Swansea also reached the Championship play-offs last season, but were beaten in the semi-final by Brentford

Swansea City manager Steve Cooper says he is hopeful fans will be allowed to attend their play-off matches.

Swansea have guaranteed a Championship play-off berth, but it remains unclear if the Welsh Government will sanction fans returning, with the matter further complicated by the Senedd election.

Swansea’s home play-off game could be the first Welsh sporting event with fans staged in more than a year.

“We are doing everything we can to make it happen,” Cooper said.

Unlike their English counterparts in the Football League, Swansea, Cardiff City and Newport County have been unable to welcome fans back to their stadiums at all this season.

The Swans have not played in front of fans since a 0-0 draw with West Bromwich Albion on 7 March, 2020.

The Welsh Government did not allow fans to return in December, a period where supporters were permitted to attend games in limited numbers in England.

However, it was announced in April that a range of cultural and sporting events would form part of a pilot scheme for the return of spectators in Wales.

The play-off match for the Swans, who will face either Bournemouth or Barnsley, could become the first Welsh major sporting event with fans, while Newport could also be set to welcome fans back if they reach the League Two play-offs, with the Exiles’ fate in their own hands with a game to go.

Cooper says talks are ongoing, with the club doing all they can to make it happen.

“We’re hoping to get the green light. I’m not sure on the exact numbers, but to get a portion of supporters back in the stadium, I am sure the club are doing all that they can,” he told BBC Sport Wales.

“The quicker we get the fans back into the stadium the better, and for all of football, even when we go to away games, you don’t wish keeping people out of stadiums on any club or any set of supporters.

“For us, we just want to get our people back into our home as quickly as possible because it’s a special place, when the atmosphere gets going it’s a unique one.”

Cooper says he feels it will be a special moment if fans are permitted to return, with the Swans hoping to book a place at Wembley for the play-off final.

“Football is not as good without the fans in the stadium, we should never get used to it,” he added.

“You’ve seen recently the power of supporters… football is built on supporters.

“It’s right and proper they are there and if we get them back in our ground it would feel like an advantage, it would only be a positive thing for sure.

“It will be a special moment when we have fans back in and one I think everyone will savour.”