There is no culture of silence in Ghana 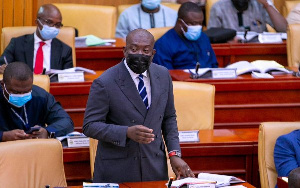 Information Minister, Kojo Oppong-Nkrumah, has debunked claims that Ghana is currently experiencing a culture of silence.

Speaking to journalists, Oppong Nkrumah said those making the allegation are those who don’t want their views to be opposed. “This claim that there is something called the culture of silence in this country cannot be true. This is a country of about 500 radio stations, 100 TV stations, millions of social media accounts and everybody is freely expressing themselves”.

“What some persons cannot stand is that when they express their thoughts and other people disagree, then they claim you are silencing them. Respectfully, that is the beauty of our democracy, that I will have my say, and you can disagree with me,” Mr. Oppong Nkrumah said.

His comments come after former AngloGold Ashanti boss, Sam Jonah insinuated that the country seems to be in a culture of silence.

Mr. Jonah, in his recent public lecture with Rotarians in Accra under the theme: Down the Up Escalator: Reflections on Ghana’s Future by a Senior Citizen, bemoaned that many individuals and civil society organizations that used to speak up against social ills have all gone mute under President Nana Akufo-Addo despite wanton corruption, killing and torturing of journalists, and rising moral degeneration in the Ghanaian society.

According to him, “we have elected governments since 1992 to steer our affairs. But the very nature of our democratic setup is our undoing. The three arms of government are like a tripod. For stability, each leg must have enough strength to stand. In our system, one leg i.e the executive has more strength than the other two combined. In fact, the two seem to derive their strengths from that of the executive, thus weakening checks and balances. Any party that comes to power has absolute power to do whatever they want. The 1992 Constitution is the basis for the current democratic dispensation. It created a monstrous executive which looms large over the other arms of the governance structure, and for 28 years, we have failed to make any meaningful changes to strengthen our democracy. Actually, what we have is an “Executocracy”, not a democracy.

The President is supposed to appoint the majority of his ministers from Parliament. By definition, that makes Parliament a rubber stamp, because no MP in the ruling party will be able to stand up and demand accountability from the executive; they are all scrambling for positions! The Judiciary is no different. The President has a determining role in the appointment of all the judges of the Supreme Court including the Chief Justice. This festers the perception that the situation compromises the impartiality and independence of the judiciary. Indeed a large section of the citizenry believes that the judiciary is not impartial with 85% of Ghanaians in a recent Afrobarometer survey perceiving the judiciary as corrupt and ineffective.”

However, Dr Steve Manteaw, Anti-corruption campaigner and chair of the Civil Society Platform on Oil and Gas, has rejected claims that Ghana is currently experiencing a culture of silence.