‘Zoetrope’ Review: And You Thought Your Apartment Was Small? 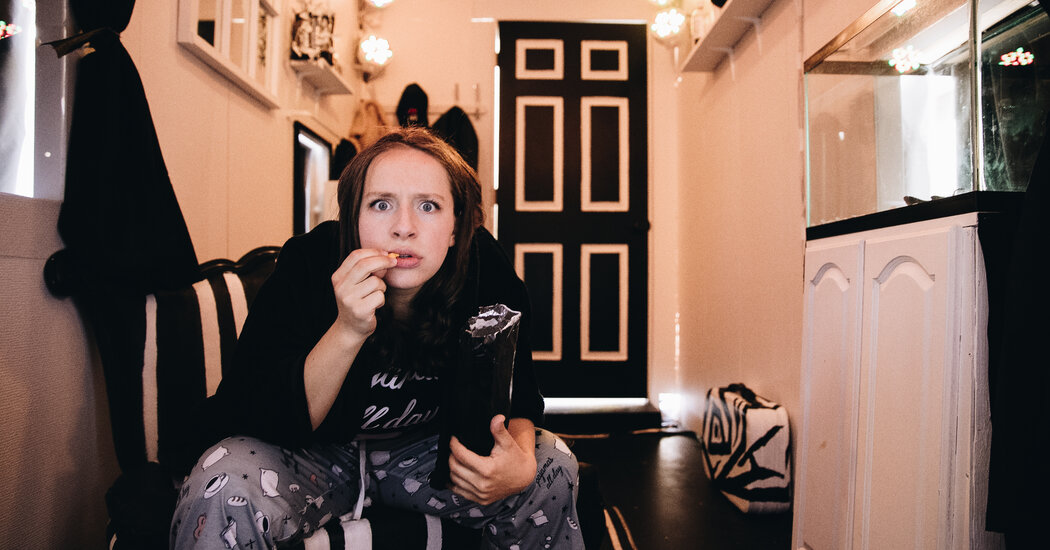 In this real estate market, Brooklyn agents can find renters for pretty much any apartment, even one in a vacant lot across from a Subway and a Smoothie King at the border of Fort Greene and Clinton Hill. One Lilliputian even by New York City standards.

Meet the tenants: a Black woman named Angel (Starr Kirkland) and her white girlfriend “Bae” (Leana Gardella), who share the space in the Exquisite Corpse Company’s imaginatively conceived and playfully executed “Zoetrope,” a live interactive show performed inside — surprise — an 8 by 12 trailer. A handful of audience members peek in through glass cutouts on three sides, listening through plastic headphones plugged into a mini MP3 player.

It’s 2020, right at the start of the pandemic, and at first the stay-at-home orders land like news of a snow day: Angel and Bae dance around the apartment, smoke bowls, watch TV. But things quickly unravel. In various versions of the roughly 35-minute plot, they fall out about race and privilege; find emotional connection elsewhere; and fight about the struggle to buy groceries or get a flu shot.

The ending of the play is inevitable, but the path it takes to get there varies, depending on the audience. Directed by Porcia Lewis and Tess Howsam, “Zoetrope” is both a surreal diorama of the recent past and a voyeuristic choose-your-own-adventure-style performance.

Forget traditional seating options like mezzanine or balcony; for “Zoetrope” you get to choose from “TV,” “Time (a calendar),” “Portrait” and “Fish Tank.” These are the openings through which you examine Angel and Bae’s pandemic life.

From my seat at the TV, I peered, “Truman Show”-style, through the screen, unnerved by the glances of the couple as they sat down to watch Netflix, in fact staring directly through the glass at my face.

Written by Leah Barker, Emily Krause and Elinor T. Vanderburg, the play has over two dozen possible story lines: Each writer has contributed three scenes, with audience members selecting how the narrative will progress from one setup to another by choosing among buttons illustrated with seemingly random images.

The images give few hints of what plot turns may come: My own options were a VHS tape, a Goldfish cracker with sunglasses perched on its head, and a bottle of Absolut vodka with a tag that said “Drink me.”

I won’t tell you what I picked (your experience, should you go, will be your own). But my selection was beside the point; the small scale of “Zoetrope” allows it to be truly interactive in ways that larger productions cannot logistically pull off. The show lets the audience be, in some small but significant way, the authors of the story.

Though I shouldn’t give short shrift to the actual authors, who deliver a heightened experiment in language with frequent leaps into the surreal. A pet fish speaks; the TV offers prophecies of the future; scenes are paused and fast-forwarded.

All the while Angel and Bae share a kind of whimsical dream-speak, interrupted by moments of brutal honesty and bold self-definition. “Before I was all airy hollow soft spaces and those spaces filled up solid and now I don’t feel like I owe anyone anything anymore,” Bae says in one scene, almost as a threat.

Kirkland and Gardella, the actors at my performance (Vanessa Lynah and Jules Forsburg-Lary star on other evenings), lack chemistry but tap into the volatile brio of the script’s terse exchanges and passive-aggressive asides.

Bae, flattened into a liberal feminist villain, bursts into many scenes as an interruption of her girlfriend’s thoughts and monologues. Angel, whom the script clearly favors, comes off as real and familiar, caught between fury and exhaustion at a throwaway comment or phrase from Bae, her face suddenly tight and guarded.

The biggest pleasure of “Zoetrope” is spying on this couple in their space, beautifully designed by Emily Addison and Dominica Montoya. The black-and-white interior does double duty, catching the eye but also echoing the racial tensions; the set combines the chic sophistication of an art installation (the Victorian-style love seat, the white owl bust) and the self-aware playfulness of Brooklyn millennial life. (I really liked the Lucky Charms box, rendered without any of the usual cheery colors.)

Given the choice to go back to the dark early days of lockdown, I would absolutely pass. But at “Zoetrope” I found myself falling into an anomalous nostalgia — a kind of historical fiction where the strangeness of isolation allows for the possibility that anything can happen.

After one of my scene selections, Angel knelt down in front of the TV screen to ask me, “Do we ever go back to how we were?”

The best I could do was shrug. After all, I was just a face on a screen, watching through the glass.

Zoetrope
Through May 23 at 134 Vanderbilt Ave Brooklyn, N.Y.; exquisitecorpsecompany.com