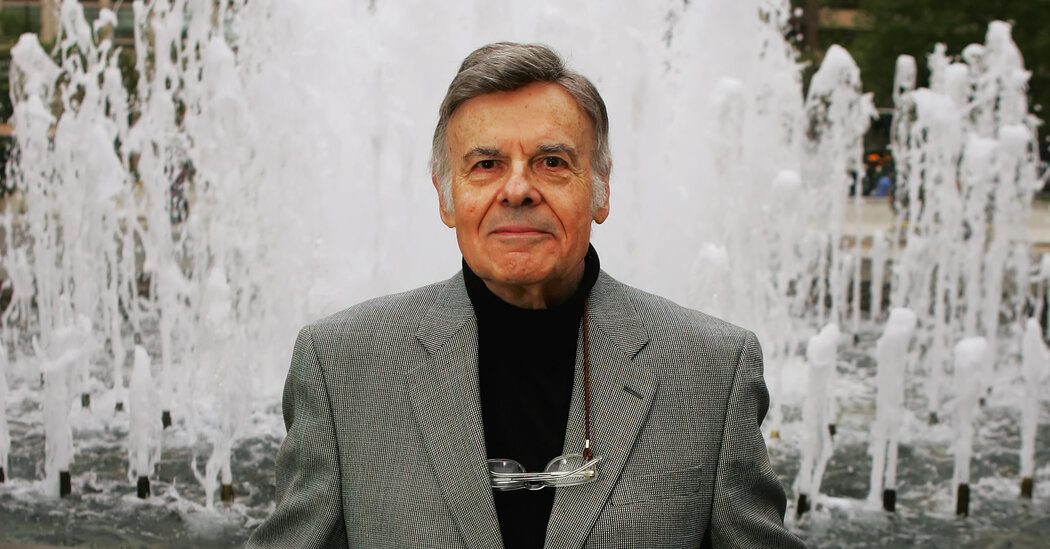 Martin Bookspan, who parlayed a childhood grounding in classical music into a career as the announcer for the “Live From Lincoln Center” telecasts and the radio broadcasts of the Boston Symphony and the New York Philharmonic, died on April 29 at his home in Aventura, Fla. He was 94.

The cause was congestive heart failure, his daughter Rachel Sobel said.

Mr. Bookspan started violin lessons when he was 6, but he realized by the time he entered college that he would never be the next Fritz Kreisler or Jascha Heifetz. After an early career behind the scenes at radio stations in Boston and New York, he established himself as a stalwart of “Live From Lincoln Center,” the PBS program that became America’s premier source of classical music on broadcast television. He joined the program when it went on the air in 1976.

“Live From Lincoln Center” was, for him, not that different from radio — he was heard but not seen. He would open the broadcast, then hand off to on-camera hosts like Beverly Sills, Dick Cavett or Hugh Downs.

“The camera was never on Marty,” said John Goberman, the program’s longtime executive producer. But, he added, Mr. Bookspan “was more than just the announcer. The comfortable and familiar part of every broadcast was Marty Bookspan.”

Mr. Bookspan’s voice “didn’t sound like a lion,” Mr. Goberman said. “He spoke in a very straightforward, friendly, conversational way.” The Palm Beach Post, describing Mr. Bookspan’s voice after an interview in 1994, said: “Even on the telephone, it’s a voice that resonates with the rarefied air of high culture, the sort of voice you might hear on a public-television pledge drive. But it’s not so stuffy that you couldn’t imagine it delivering the play-by-play of your favorite team.”

Mr. Bookspan himself said, “If I have a technique, it’s the technique of the sportscaster.”

“As sportscasters make the game come alive, I hope I have made concerts come alive,” he explained in 2006, as he prepared to leave “Live From Lincoln Center” after 30 years. “I want the audience to become involved, to love what they’re hearing.”

By then, the “Live From Lincoln Center” audience was accustomed to hearing his preconcert warm-ups and his postconcert signoffs. With a well-dressed crowd in the audience and big-name performers on the stage, the proceedings had a touch of glamour, but not necessarily for Mr. Bookspan. He and his microphone were sometimes installed in dressing rooms, closets — even, at Lincoln Center’s Alice Tully Hall, in what had been a women’s restroom. He was connected to the stage through his headphones and a video monitor.

Martin Bookspan was born on July 30, 1926, in Boston. His father, Simon, was a dry goods salesman who later switched to selling insurance; his mother, Martha (Schwartz) Bookspan was a homemaker. Simon Bookspan was passionate about Jewish liturgical music and took his son to hear prominent cantors.

He was also heard on the campus radio station, where he conducted his first important interview in 1944. His guest was the composer Aaron Copland, who revealed that he was considering writing a piece for the choreographer Martha Graham. It turned out to be the ballet “Appalachian Spring.”

In his future broadcast career, Mr. Bookspan would interview more than 1,000 performers and composers, from the conductor Maurice Abravanel to the composer Ellen Taaffe Zwilich.

After working as the music director at WBMS, a classical-music station in Boston, he joined the staff of the Boston Symphony in 1954 as its radio, television and recordings coordinator. In 1956, he moved to New York to become the director of recorded music at WQXR, then owned by The New York Times.

At WQXR, he hired John Corigliano, at the time a fledgling composer, as an assistant. He proved to be a concerned boss.

Mr. Corigliano called in sick one summer morning. “I should’ve known better, because Marty was so considerate, he called later in the afternoon,” Mr. Corigliano, who won the Pulitzer Prize for music in 2001, said in an interview. “I went off to the beach. Marty called, and my roommate answered the phone. Marty said, ‘How is John feeling?’ My roommate said, ‘Oh, he’s great. He’s at the beach.’

“The next day I walked in. There’s Marty. I approached him slowly and said, ‘I’ll never do it again.’”

Mr. Bookspan left WQXR in 1967 and joined the music licensing agency ASCAP as coordinator of symphonic and concert activities. He was later vice president and director of artists and repertoire for the Moss Music Group, an artists’ management agency. He was also an adjunct professor of music at New York University.

In the 1960s and ’70s, he was an arts critic for several television stations, including WABC and WPIX in New York and WNAC (now WHDH) in Boston. He was a host of “The Eternal Light,” an NBC program produced with the Jewish Theological Seminary, and, in the 1990s and early 2000s, the announcer for the CBS soap opera “The Guiding Light.”

He also wrote reviews of recordings for The New York Times (on open-reel tapes in the 1960s and compact discs in the 1990s). He wrote several books, including “101 Masterpieces of Music and Their Composers” (1968) and, with Ross Yockey, biographies of the conductors André Previn and Zubin Mehta. He handled radio broadcasts for the Boston Symphony and later for the New York Philharmonic.

His wife, Janet Bookspan, died in 2008. Besides Ms. Sobel, he is survived by a son, David; another daughter, Deborah Margol; six grandchildren; and one great-grandchild.

The tenor Jan Peerce called Mr. Bookspan’s knowledge of music “encyclopedic,” and it served him well when he had to ad-lib.

One night in 1959, he was the announcer for a Boston Symphony broadcast that featured the pianist Rudolf Serkin playing Brahms’s Piano Concerto No. 2. Mr. Bookspan did his usual introduction before Serkin and the conductor Charles Munch made their way across the stage. Mr. Bookspan told The Berkshire Eagle in March that once they plunged in, “I did the one thing that I learned I should never do again: I left my broadcast booth.”

With Serkin “flailing away with a vengeance, pounding the pedals for all they were worth, caught up in the work and oblivious to all else” — as Mr. Bookspan recalled in a different interview — he headed to the green room to chat with Aaron Copland, who was on hand for the concert.

Suddenly, in the second movement of the Brahms, there was silence.

Mr. Bookspan talked nonstop for more than 15 minutes until the piano had been fixed and Serkin and the orchestra started playing again.