‘Scott and Andy and All the Boys’ Review: Ripped From the Headlines 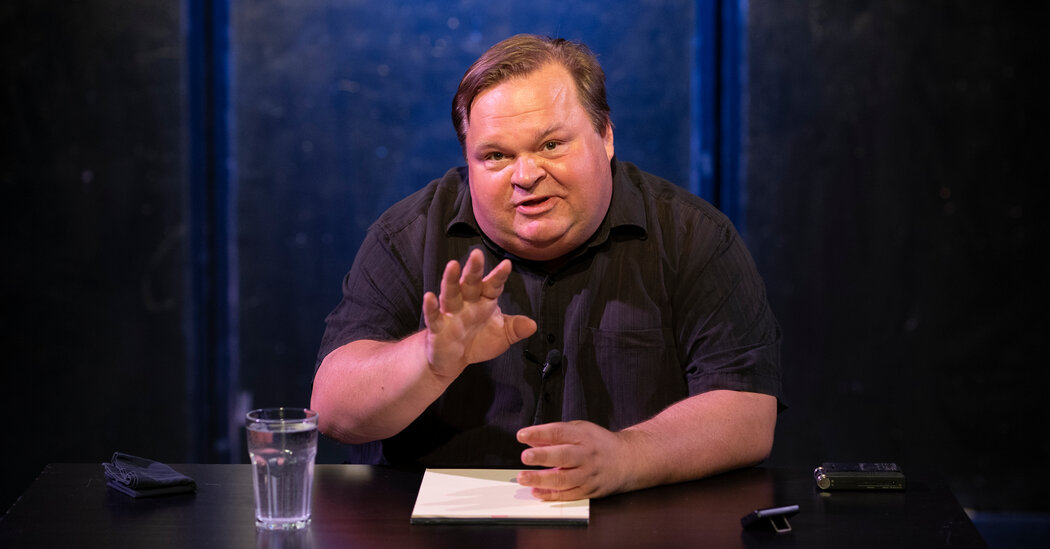 A lot of us have gotten rusty at talking face to face — at stringing our thoughts together in a coherent and entertaining way. Desperate to commune as we slowly emerge from our pandemic hibernation, we’re a little woozy still from all the isolation.

It could be that the monologuist Mike Daisey is, too. That would go some way toward explaining why his enticingly titled new solo show, “Scott and Andy and All the Boys,” often feels more like barroom blather than sharp-minded storytelling, and why it takes such sluggish aim at its juicy targets: the disgraced Broadway producer Scott Rudin and the scandal-tarnished governor of New York, Andrew M. Cuomo.

Daisey means to spin the recent allegations of workplace bullying by Rudin and allegations of sexual harassment by Cuomo into a wider critique of the patriarchy, indicting us collectively for rewarding both men’s behavior through the years, enabling their success. Ripped from the headlines, and involving two of Daisey’s areas of consuming interest — theater and politics — the material seems ripe for his comically lacerating provocations.

Yet watching this directorless show’s single live performance on Friday night at the Kraine Theater, with a fully vaccinated, mask-muffled, socially distanced audience in attendance and a virtual crowd tuning in to the livestream, I kept wishing that Daisey actually was holding forth in a bar — as a regular person, not a monologuist on a stage. Then his listeners might have been able to interject, pushing back on the weak spots in his argument, querying the bits that were puzzling.

For instance, the distractingly opaque story of a quarrel with his girlfriend over the sheets on their guest bed. Daisey sees this interaction as gendered and uses it to frame the show, but I still have no idea what was so wrong with the sheets, how it turned into a giant fight between them and what was so gendered about it. He deploys this anecdote to implicate himself as a member of the patriarchy, but surely he could find a less baffling example.

It made a rickety opening, the first stretch of tedium in a not quite 90-minute evening that never did alchemize — partly, perhaps, because Daisey underestimated his audience. Presented by Daisey and Frigid New York, “Scott and Andy” isn’t a niche-knowledge monologue like “The Last Cargo Cult,” his show about money and financial systems; it doesn’t rely on extensive research like “The Agony and the Ecstasy of Steve Jobs.” It’s based on news that’s fresh in our memories, and if we race to watch a performance about Rudin and Cuomo, chances are high that we don’t need much of a recap.

Daisey was on the Kraine stage just last month with a different show, which was also performed for both live and streaming audiences — a bifurcation that is still an awkward experiment. The setup demands that he talk straight to the crowd in the theater and simultaneously connect with people online.

The pulsating humans in the theater were essentially put on hold for minutes at a time while Daisey provided back story on Cuomo for the remote-viewing out-of-staters. Speaking past the people right in front of you is not a great way to tend to the energy in the room.

More problematically, while Daisey spent a lot of the show repeating reported details of Rudin and Cuomo’s alleged transgressions, he never wove them into something more textured and insightful, which is what we come to him for.

He was eager to say that everyone in theater knew about Rudin, but he didn’t mention having experienced or passively witnessed any other bad behavior by men in his industry, the silence about which is ingrained in its culture. That kind of acknowledgment would have helped to make his case both more rooted in insider knowledge and reflective of male behavior that goes beyond the pair of titans in his show’s title.

And when Daisey suggested, twice, that Cuomo has been lately “gelded” by legislators, there was no sign that he thought the term might smack of machismo.

There were moments in “Scott and Andy” when the performance went taut and Daisey found his rhythm, as with his funny-serious point about workaholic men needing to cultivate hobbies. But those were rare.

In the program — an actual paper program! — Daisey prints a quote, attributed to the canonical second-wave feminist Andrea Dworkin, on the necessary death of manhood.

Daisey himself, though, seems rather new at thinking about the patriarchy. This inchoate show is a baby step taken by one of the boys.