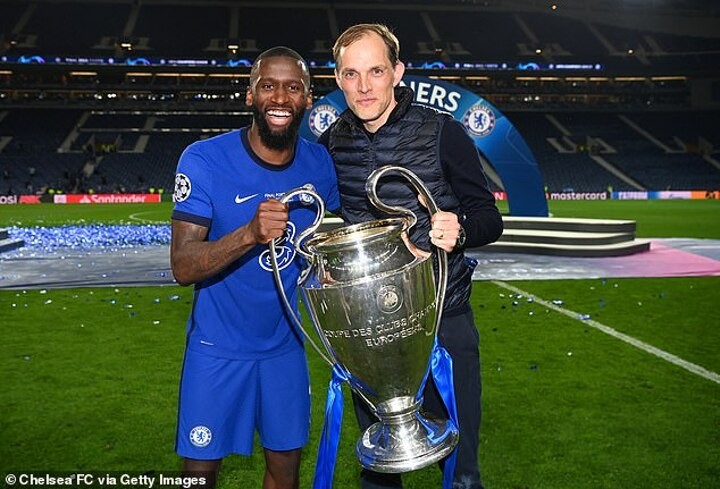 Chelsea manager Thomas Tuchel and his staff stayed with his players until beyond 3am following their Champions League final victory over Manchester City.

The group headed to a banqueting area at the side of the Douro River which had been used to host an event for City fans the previous night.

Antonio Rudiger was the star of the show, taking control of the microphone and starring in dance-offs. Chelsea will not parade the trophy because of pandemic restrictions and the fact that most players will now jet off to join their countries ahead of the Euros.

MCC SAY NO TO SALE TALE

Former Sports Agenda columnist Charles Sale last week released his new book — The Covers Are Off: Civil War at Lord’s — to much fanfare everywhere other than at the home of cricket itself. The po-faced MCC refused to stock what is a forensic examination of its long-running row with developer Charles Rifkind, who craftily acquired the rights to develop the railway tunnels underneath the Nursey End from under their noses.

In a move that will raise knowing nods from Sale’s acquaintances and adversaries, those who travel to the ground for this week’s New Zealand Test via St John’s Wood station will notice posters advertising the book, which is due to be on sale at the Oval — in every single slot at the sides of the elevators.

A thinly-veiled dig at former manager Chris Wilder by Sheffield United in the form of a bizarre ‘resolution of thanks’ to temporary replacement Paul Heckingbottom from the club’s board has not gone down well.

The Saudi-owned Blades posted a ‘unanimous resolution’ on their website which, among other jibes, pointed out that Heckingbottom won one match fewer in 11 matches than Wilder managed in 27. Given the pair are good friends, it is unlikely either side will have appreciated the move.

Meanwhile, sources have claimed that Alan Knill, Wilder’s assistant, is being forced to come into work each day and sit in an office in the hope that the club can ask for compensation should Wilder — linked with West Bromwich Albion — take him to his new employers.

Club insiders, however, claim Knill is a valued member of staff and will work closely with new boss Slavisa Jokanovic.

Sky Sports have encountered issues when trying to find big-name former players to form part of their Lions coverage in South Africa. Traditionally, ex-stars heading on tour to provide punditry make it a lucrative trip by appearing at dinners organised for the thousands who travel from these shores.

With such money-spinning earners not possible, bosses have met a reluctance from some, who feel they can earn more staying at home.

All Team GB athletes and staff, regardless of age, have received an email instructing them how they can now get a Covid vaccine ahead of the Tokyo Games.

Nobody could accuse Jermaine Jenas of not taking his ever-expanding TV work seriously. The former Newcastle and Tottenham man has asked for planning permission for a garage extension at his plush Hertfordshire pad, complete with a media room.

Jenas is already a co-host on The One Show and is tipped to succeed Gary Lineker when he eventually steps down as host of Match of the Day. Jenas wants to install a new garage with a media room above it at the six-bedroom residence.

Champagne corks were popping in Peterborough as well as Brentford after the Bees clinched promotion to the Premier League at the weekend. Posh officials inserted a clause in the move that took striker Ivan Toney to west London last summer which entitled them to a bonus thought to be worth £1m should the former Newcastle man fire them to promotion which he duly did netting the first goal in a 2-0 play-off final win over Swansea.

Interesting figures from Lancashire regarding their County Championship match against Yorkshire. Around 3,500 headed to Old Trafford on Sunday to watch the Red Rose triumph with a noticeable number of women and children in the stands.

Online, views of the live stream totalled a staggering 589,000 over four days with 65 to 70 per cent of the audience made up of 18 to 34-year-olds. Not bad for a sport branded of interest only to old men — although viewers failed to be spared claptrap from Sky commentators telling them how wonderful the Hundred is going to be.

Two quick-thinking Manchester United stadium workers have won praise after racing to the aid of an elderly man on their way to work. The pair spotted that the pensioner had collapsed on the pavement and ran to the scene, to find him unresponsive and turning blue.

They performed CPR and got him breathing again until an ambulance arrived. The two have since been to see the man’s wife and were pleased to hear that he is now recovering.

Blackpool bucked the play-off trend by basing themselves at the Hilton Hotel opposite Wembley Stadium before Sunday’s League One final against Lincoln. Most clubs stay elsewhere and travel in due to a belief that having rooms overlooking the venue may ramp up the pressure on their players. As things transpired, the Seasiders made the right call as they won 2-1.

The disgraced world governing body of amateur boxing, AIBA, seemed out for the count when the International Olympic Committee stripped them of running all Olympic boxing competitions – starting in Tokyo.

However under their newly elected Russian president, Umar Kremlev, AIBA’s bid to get back in charge of Paris 2024 boxing has begun. First of all he introduced Champions League staples Gazprom as a global sponsor and last week cleared a £7m AIBA debt – two key requirements from the IOC.

It remains to be seen whether introducing Russian state sponsorship funding passes the IOC test, but if nothing else, AIBA at least seems to be off the ropes and fighting back.

Sport England continue to be on the lookout for a new chair, six months after advertising the post. Current chair Nick Bitel was expected to depart earlier this year, with the search for a replacement having launched in November. However, no announcement has been made by the Department for Digital, Culture, Media and Sport over what will be a key role overseeing grassroots sport and physical activity.

In April, this column reported the pending departure of two respected BBC Olympics correspondents after the Games from a broadcaster that appears to have lost its mind. It gets worse. One of the two, David McDaid, announced on Sunday that he is departing sooner than expected and will not be helping their coverage in Tokyo.

With contributions from Chris Foy and Matt Barlow