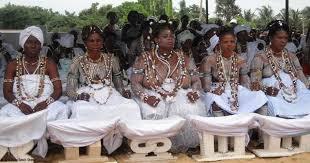 The Reverend Lawrence Kwesi Tete, Minister in charge of Grace Presbyterian Church Tema Community 11 has advised that traditional culture should be Christianized and not demonized.

“Most cultural values are as pure as Christian values,” Rev. Tete stated in an interview with the Ghana News Agency that culture was described as a way a group of people live, their values, what they eat, what they wear, their customs, history and structures by which that group of people are noted for are all embedded in culture.

He said before Christianity came to Ghana, cultural values, traditions and other structures like the local courts headed by the chieftaincy were in place.

He said agriculture, trade, and education were even in the form of informal where people did not necessarily go to the classroom to learn but they were thought by the day to day actions of their parents and the people they lived with.

He explained that, it got to a time that when the people who got into Christianity thought that everything traditional or cultural was demonic.

Rev Tete said, traditional drums like the fontomfrom, atupan, dondo, Kete combined with traditional dance like adowa, kete, kpanlogo made a beautiful culture and so much entertaining with messages.

He said in the past dipo or bragoro was performed on a lady to show that she was ‘ripe’ for marriage, you dare not even get pregnant because you wouldn’t want to incur the wrath of the gods.

He said dressing system was beautiful and recounted how the late Mr Ephraim Amu got sacked from the then Presbyterian Training College for preaching in cloth.

He said during naming ceremony, a drop of water and alcohol was used to represent truth from lies, faithfulness and righteousness and he believed that the church could adopt the system and replace the alcohol with any soft drink of their choice and still maintain the cultural values.

He said, the Church seems to have taken over naming, marriage, education among others but in as much he does not disagree with the Church performing these rites he would humbly suggest to the leadership of the Church not to demonize or rubbish everything of the traditional set up.

He added that, as the church tried to Christianize culture, it should not be demonized in any way and Ministers of the gospel could partake in festivals and other ceremonies to bring out the values and encourage members to grab it to integrate Christianity and tradition.

Share
Facebook
Twitter
Pinterest
WhatsApp
Previous article‘Lady Boss: The Jackie Collins Story’ Review: She Did It Her Way
Next articleWho are the top female sports journalists in Rwanda? Meet the women running the show | The New Times
- Advertisement -