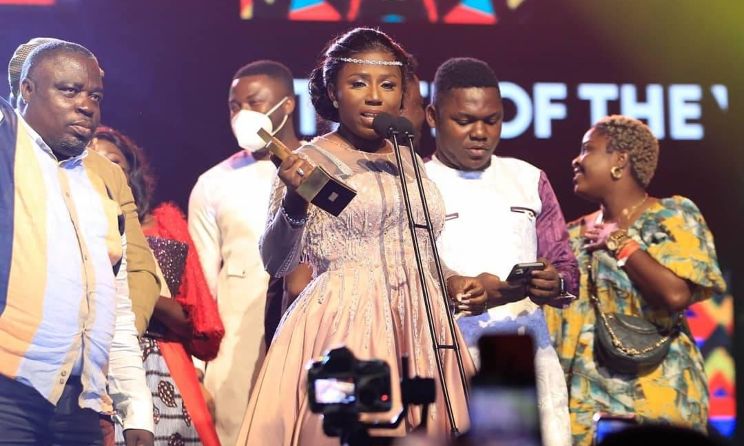 Hamilton, the renowned musician behind local hits including ‘W’asem’, ‘Mo Ne Yo’ and ‘Adom’, clinched the trophy ahead of Adina, KiDi, Medikal, Sarkodie and Kuami Eugene, who won the coveted trophy at last year’s edition of the awards, which celebrates outstanding musical feats in the country and across the continent. The win for Hamilton also comes on the heels of securing a brand ambassadorial deal with insurance company Enterprise Life in May alongside rapper Kofi Kinaata.

An elated Hamilton expressed gratitude to everyone who supported her to annex the title.

“Family, what God cannot do does not exist,” she added in a Facebook post shortly after her big win. “I’m trying to put this all together but making sense of it means I’ll be doubting God’s ability. To everyone who supported me through your prayers, words of encouragement, public or private support, I am very grateful. It’s been a long day and a bit. This is to encourage somebody out there, the road might be long but it will be worth it just trust the process!”

Going into the night, KiDi, 3Music Awards’ Artist of the Year for 2021, was widely believed to be Hamilton’s biggest contender in the keenly contested category as he too had emerged as a top favourite among industry watchers, heightening the debate around who deserved the ultimate title. The musician, who had released his sophomore album days earlier, chalked impressive feats in the year under review, notable among them being the release of the commercially acclaimed Blue EP, and securing a deal with US multimedia music publishing and entertainment company Made in East New York, which announced a new partnership deal with international distribution company and record label Empire.

A feature of the awards in recent years, Hamilton’s Artist of the Year win was also heralded by a campaign by fellow musicians and industry gatekeepers, notable among them being artist manager Nii Noi, producer Fred Kyei Mensah, and singers Sonnie Badu, Ohemaa Mercy and Celestine Donkor.

“We know Adina Thembi [who this year became the most nominated artist in the award scheme’s 22-year history] with was an industry favourite when the nominees were released, but her ‘clout’ dropped,” journalist, university lecturer and popular culture critic Mic Yamoah held at the height of the debate. Yamoah observed that Adina had “been able to warm herself into people’s hearts with her recent performance at the Ghana Music Awards Experience concert”, however, it had become “too late” as KiDi and Diana Hamilton had taken over because they were “hungrier”.

While Yamoah admitted that KiDi was the one to beat due to industry backing, he noted that public voting could be his biggest hurdle, insisting that Hamilton had the support of neutrals as well as pro-gospel folks.

Colleague journalist Gary Al-Smith echoed Yamoah’s sentiments after the announcement of Hamilton as Artist of the Year. “It’s very, very hard to win against the religious side of GH at almost any level. Joe Mettle proved it. Diana Hamilton proves it again.

“The gospel side doesn’t make much noise. But the influence is huge. And, when a gospel song is a hit, it is not just “one song”. It’s a whole movement. Hard luck to KiDi. Come back stronger next time.”

After losing to Hamilton, KiDi took to social media to congratulate her. “To God be the glory,” he tweeted. “Thank you, Ghana. Huge congrats Aunty Diana.”

Elsewhere, Sarkodie took home the Best Collaboration for his song Happy Day featuring Kuami Eugene, and Medikal won the Best Hip Hop/Hiplife Artist of the Year. Kofi Kinaata, who picked up the Songwriter of the Year Award for ‘Behind the Scenes’ the previous day, also received the Vodafone Green Award for his campaign against illegal fishing.

The main awards night witnessed performances from top acts including rapper Eno Barony, Mr Drew, KiDi, Joeboy, Kwesi Arthur, and Adina. Sarkodie led a special tribute performance for hiplife artist Castro, who disappeared about seven years ago at the Ada Beach and is expected to be legally declared dead next month.

Meanwhile, Day 1 saw significant victories for Richie Mensah, who picked up the awards for Sound Engineer of the Year and Producer of the Year. Gospel singer MOG Music won his second consecutive Male Vocalist of the Year trophy. Highlife veteran Bob Pinodowas the recipient of the Lifetime Achievement Award, whilst South Africa’s Master KG won the African Artist of the Year Award.

The 2021 VGMAs were produced by event company Charterhouse Ghana and ran under the theme, Stronger With Music.

Below is the complete list of winners from the 22nd VGMAs:

Gospel Song of the Year

Highlife Song of the Year

Hiplife Song of the Year

Hip Hop Song of the Year

Reggae/Dancehall Song of the Year

Afrobeats/Afropop Song of the Year

Afrobeats/Afropop Artist of the Year

Gospel Artist of the Year

Highlife Artist of the Year

Reggae/Dancehall Artist of the Year

Hiplife/Hip Hop Artist of the Year

Best Collaboration of the Year

International Collaboration of the Year

Vodafone Most Popular Song of the Year

Album of the Year

EP of the Year

Best New Artist of the Year

Artist of the Year

Instrumentalist of the Year

Songwriter of the Year

Record of the Year

Male Vocalist of the Year

Female Vocalist of the Year

Best Video of the Year

Best Group of the Year

African Artist of the Year

Traditional Artist of the Year

Sound Engineer of the Year

Producer of the Year