An Homage to Black Boyhood From the Creator of Tristan Strong 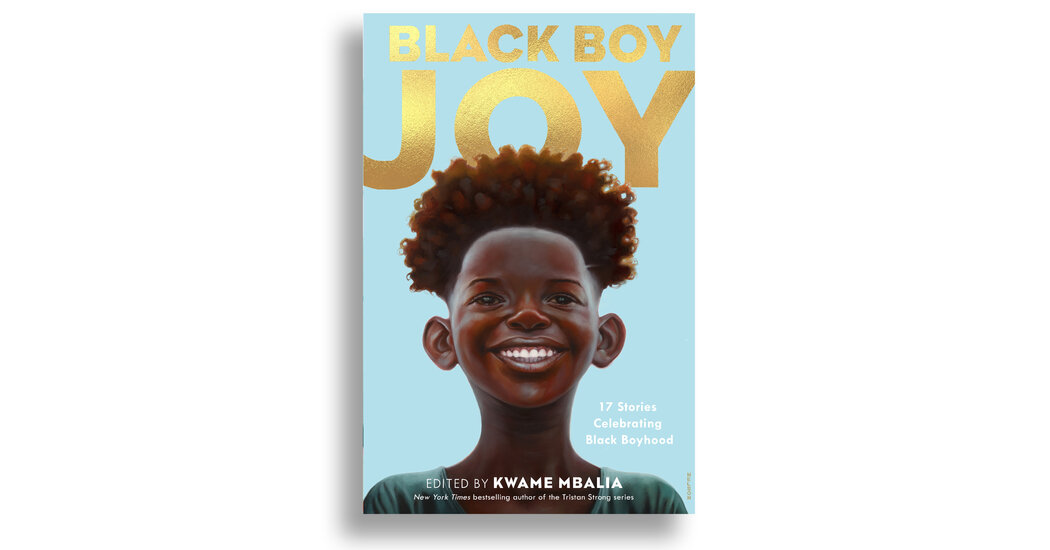 Danielle Young coined the term “Black Boy Joy” in 2016 after watching Chance the Rapper exude happiness at MTV’s Video Music Awards. A welcome contrast to how young Black men are often portrayed in the media, it soon became a hashtag. In the introduction to his anthology of the same name, Kwame Mbalia (author of the Tristan Strong series) confesses that he doesn’t like watching the news, because growing up it was “always reporting on some local shooting or some death or some other tragedy that made my mother shake her head and my father scowl … because nine times out of 10, a face like mine was on the screen.”

That’s why Mbalia invited 16 Black author friends to help him highlight “the revelry, the excitement, the sheer fun of growing up as boys in and out of the hood.” From stories (by the likes of Jason Reynolds, Varian Johnson and Tochi Onyebuchi) to poetry (Dean Atta) and comics (Jerry Craft), “Black Boy Joy” has something for every type of reader.

“Got Me a Jet Pack,” by the Jamaican American poet and filmmaker Don P. Hooper, explores a day in the life of Rodney Halfway Tree Clarke, a boy from East Flatbush, Brooklyn. (Halfway Tree, his middle name, is the place in Jamaica where his parents met.) When Rodney accidentally kicks a soccer ball into his Jamaican neighbor’s backyard and she shepherds him into her house, he’s sure she’s going to reprimand him, but instead she gives him a special black hoodie to put on (it “will provide yuh with oxygen”) and pulls out a large crystal. Before he knows it, he’s in “freaking space.” “It’s beautiful: endless wonders and radiant colors that can never be captured in a photo.” Turns out his parents have been leading a double life, and his father, who participates in races to settle disputes between rival galaxies and planets, has disappeared. (“We lost track of him before di last race. Yuh mudda went off world to go an find him.”) If he doesn’t show up, Earth could get invaded. In this empowering science fiction story, it’s up to Rodney to take his father’s place and save the day.

A more down-to-earth tale, “The Legendary Lawrence Cobbler,” by the young adult novelist Julian Winters, follows Jevon Lawrence, a seventh grader who wants to be a chef and is competing in his school’s baking contest. He recently told his father, who shares his passion for cooking, “I think I like boys,” while they were making red velvet brownies together, and things have felt “weird” between them ever since. He fears his father’s awkwardness means he doesn’t love him anymore. But when Rodney’s gospel-singing, two-stepping G’Ma arrives to teach them how to make her peach cobbler and shares a not-so-secret secret of her own, he realizes that what his dad has always told him is true: “Fear is just forgetting everything’s all right.” This touching story will resonate with young Black boys everywhere who are longing for acceptance as they struggle with newfound feelings.