How a trip to her dad’s home country inspired a B.C. fashion designer, and how she’s giving back 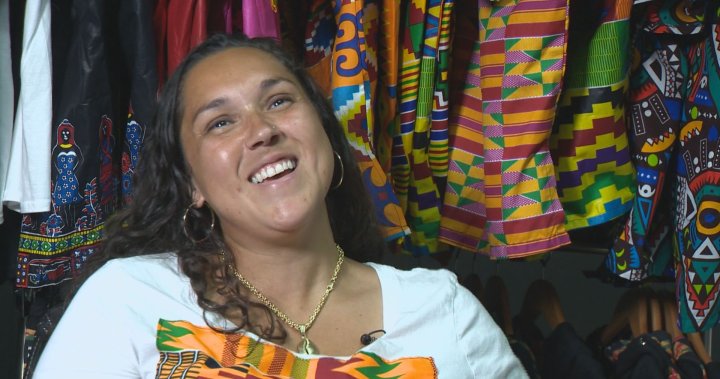 Almost 15 years after she travelled to Ghana, Naa Sheka Riby-Williams still keeps the garment that inspired her business and, later, her charity efforts, safe.

The White Rock, B.C., fashion designer bought the purple, sleeveless shirt with distinctive white patterns on a student exchange trip to the West African country. When she came home, it proved to be a hit.

“When I came back to Canada for Christmas break a lot of women were giving me compliments,” recalled Riby-Williams.

“That’s what gave me the idea.”

2:03
Has roller-skating ever truly gone out of fashion?

Has roller-skating ever truly gone out of fashion?

It set the stage for the 2007 founding of her business Naa Sheka Fashion, a business that that now employs several tailors in Ghana at a shop near the capital city off Accra.

Experiencing life in Ghana, the country where her father Charlie was born and raised, has changed Riby-Williams’ life.

He died of cancer in 2009 but her connection to his home country keeps growing.

Seeing the education system first-hand when she lived there has had a huge impact on her.

“Some of the schools don’t have a single book, which just amazed me. How are kids learning without books?” Riby-Williams said.

With help from the Surrey School District, Riby-Williams launched Books to Ghana, an initiative to support a school outside Accra.

The team assembled boxes full of books and shipped them off to build the school’s first library, and Riby-Williams hopes to send two more palettes to Ghana by the end of the year.

The teacher told me they have a superstar student and I got to meet her,” Riby-Williams said, remembering a visit to the school after the books arrived.

“Apparently she reads a book every single day which is so cool to hear.”

Fashion and philanthropy aren’t Riby-Williams’ only talents. She was a star basketball player at Douglas College, earning the nickname ‘Nash,’ after Steve Nash.

She also played for Ghana’s national team during qualifications for the 2012 London Olympics. So how did they do that year?

“Not good, we’ll just leave it at that,” she quipped. “The team did not do good at all.”

Which is just fine, because her other contributions to the community in Accra have meant so much more.

And she knows here dad Charlie would be very proud.

“I feel like this definitely keeps me connected to my dad. The culture, the heritage, the people. When I’m walking around the streets of Ghana I just see my dad everywhere around which is really cool.”