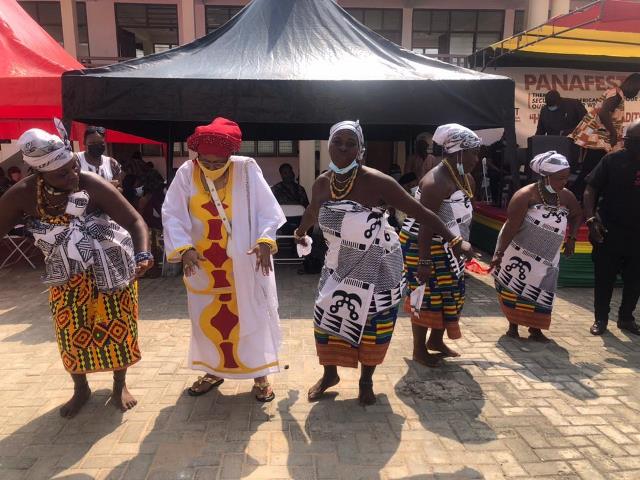 African countries have been advised to stick to their values, culture, and traditions to set the pace for the youth in reclaiming the lost culture, values and history of the Continent.

“Trainers must take advantage to instil African culture and traditions in the younger ones to support them with the requisite knowledge in retrieving our lost identities and lives,” Professor Esi Sutherland Addy, the Chairman of the Pan African Historical Theatre Festival (PANAFEST) Foundation, has said.

At a durbar to commemorate the 2021 PANAFEST and Emancipation at Emintsemadze Palace in Cape Coast, she said she disapproved of the practice where Africans spoke only foreign languages with their children and taught them foreign lifestyles and urged all to work to retain and champion the African culture.

The durbar was aimed at honouring African tradition to commemorate the PANAFEST on the theme: “ Securing the African Family; Our Soul, Our Health, Our Wealth”.

It was organised under the auspices of the Ministry of Tourism, Arts and Culture, in collaboration with the Ghana Tourism Authority, and the traditional authorities.

Prof Addy urged Africans to collectively bring back the good history, heritage, and memories of Africa to sustain her image and reputation in the global world.

She called on Africans to take steps to uproot the negative cultural practices and readily replace them with positive ones, which would support the agenda of enhancing the African economy.

She commended governments, individuals, institutions, and various bodies supporting the promotion of African history and culture.

Dr Ibrahim Mohammed Awal, the Minister of Tourism, Arts and Culture, called for the prioritisation of the safety of Africans across the globe.

The Government, he indicated, was optimistic in realising the agenda of protecting black lives adding that Africans must remain stronger in all endeavours.

He identified illegal traveling as a major problem at the borders and called on all and sundry to support the government in policing the borders to ensure peace, unity, and stability.

Mrs Justina Marigold Assan, the Central Regional Minister, said emancipation should be targeted at removing the bad perceptions some people had about African history.

“Our quest for emancipation should strengthen Africans emotionally, socially, psychologically, and financially,” she said and pledged the Government’s commitment to protecting the culture, history, and tradition bequeathed by the forefathers.

The durbar was held amidst beautiful cultural displays such as ‘Fontomfrom drumming’, exhibition of African cloths, beads and other ornaments, which symbolised the rich African culture.

Traditional leaders also performed the “Effrim” ceremony for those from the Diaspora, which signified their safety from all calamities to welcome them back home.

The durbar brought together dignitaries from all walks of life under strict adherence to the COVID-19 safety protocols such as washing of hands, wearing of nose masks, and use of sanitizers.