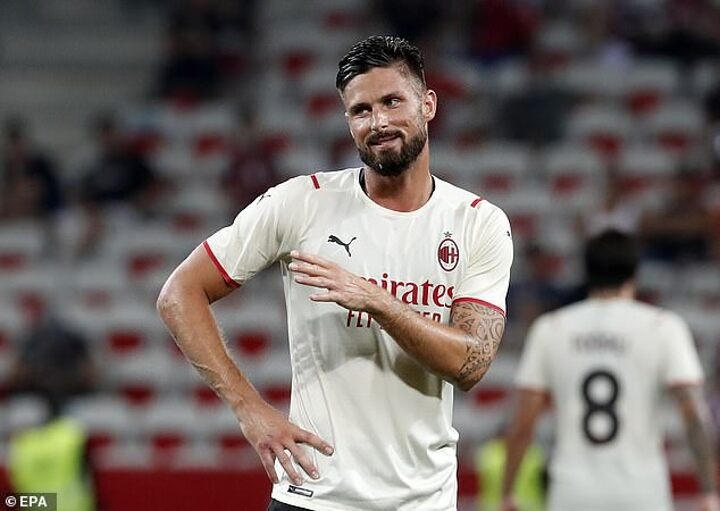 Olivier Giroud wants Hakim Ziyech setting him up for his debut AC Milan campaign after getting a taste of the Moroccan’s left foot magic at Chelsea last season.

The Frenchman has moved out of west London as a Blues cult hero after 39 goals in 119 games, joining the historic Serie A side for a bargain of £855,000.

Between them Giroud and Ziyech only managed 25 starts for Chelsea last season, with their appearances dropping off after Thomas Tuchel’s arrival.

The winger showed flashes of the brilliance Blues fans watched on his Ajax highlight reel last summer but he couldn’t find his rhythm. Now there are reports Chelsea are willing to sell the 28-year-old, with Milan among those who are interested.

‘Ziyech is a great player,’ Giroud told a press conference.

‘We have had a great connection even though we have played few games together.

‘He has a top left foot, has experience and he is very good technically. It would be nice to play with him again.’

Giroud always wanted to nail down the centre-forward spot at Chelsea but never quite gained Mauricio Sarri, Frank Lampard nor Tuchel’s trust at Stamford Bridge.

The striker had some stunning highlights, such as his four-goal masterclass against Sevilla and overhead kick past Atletico Madrid in the Champions League last season.

However, Giroud admitted he realised he had to leave after the Blues launched their pursuit of a new striker to challenge Timo Werner this summer.

‘I have always said that when I was little I had the dream of playing in the Premier League but I think it was time to discover a new culture and a new country,’ France’s third-highest all-time scorer added.

‘Milan was the best option for me and I am grateful to be able to wear the Rossoneri colours. I’m happy to be here.

‘My time at Chelsea was over also because the manager wanted to play with other players, spending a lot of money in the transfer market.

‘There I realised I had to leave the club and I received a great welcome from Maldini. I’m a Christian and I think God wanted me to move to Milan this season and not Inter the last one and I’m happy with that.’