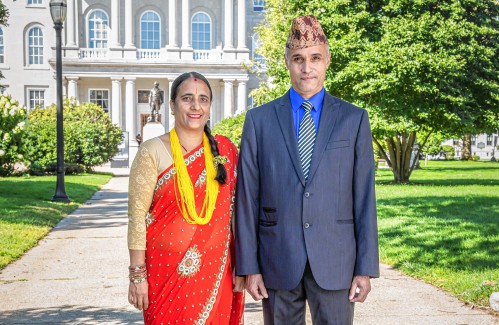 For Concord High School teacher Ghanashyam Sharma (Dahal) and his family, “doing as the Romans do” is crucial when settling in new places.

When they moved to New Hampshire eleven years ago, the Sharmas made an effort to adapt to the United States while still preserving traditions from Bhutan, Nepal, and the few other countries they lived in.

“We moved around like four or five countries and we at least understood some sort of values,” Sharma said. “Customs, tradition, and culture of that land and area. … We have to follow the norms, rules, culture, values, and expectations.”

As someone who has lived in multiple countries before moving to the United States, Sharma is well-versed in different immigration processes.

Pre-resettlement agencies make it a point to help familiarize people with basic customs of the place they are relocating to. Still, there are difficulties for many refugees.

“Those who have not gone to school or have limited English language or not at all, they have some difficulties,” Sharma said, adding that casual phrases like, “are you all set?” can challenge anybody whose first language is not English.

The last time somebody asked him that, Sharma joked, “No, I’m not ‘sad.’ I’m very happy.”

Despite living elsewhere for the majority of his life, Sharma is happy in New Hampshire.

“New Hampshire has a moderate kind of climate, little bit of snow in winter, but not that much bad, and beautiful summer … and then less population.”

“We can talk to anyone or if something is happening we get the latest news and views from here and there so easily.”

Sharma said he and his wife, Nirmala Niroula Sharma, and two children, Pradeep and Pratima, do eat Indian and Nepali food at home, but they are adventurous and interested in eating anything, including meals popular in any other American household. Pizza, for example, is a favorite with his children.

“There is not any very specific kind of family tradition,” said Sharma, who described his family as “very normal, flexible.” They don’t have “any specific kind of a strict religion or culture. The culture and religion that we celebrate is very normal that is celebrated all over the world.”

This profile is part of a series written by students in Linda Lawson’s journalism class at Concord High School, as part of a collaborative community storytelling project with the Concord Multicultural Festival and Report for America.