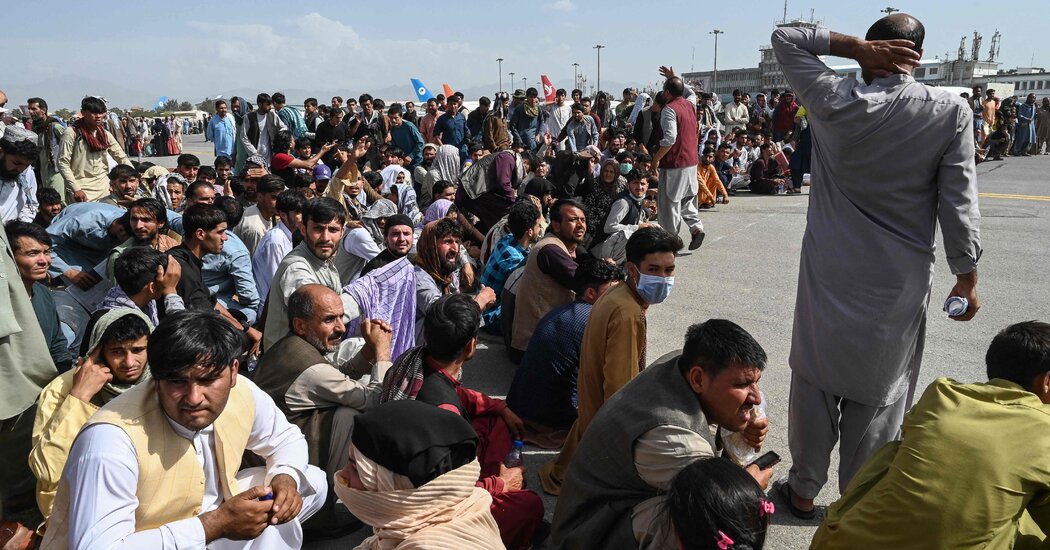 President Biden’s unapologetic defense on Monday of his decisions in Afghanistan rallied some Democrats to his side, but the president still faces angry and increasingly public criticism from lawmakers in both parties over the chaos descending on Kabul.

After leaving the White House largely undefended, some Democratic leaders voiced tentative support after the speech.

“President Biden understands history when it comes to Afghanistan,” said Senator Richard J. Durbin of Illinois, a member of Democratic leadership. “He made the difficult decision to not hand over this longest of American wars to a fifth president, and had he walked away from the withdraw agreement originally negotiated by President Trump, Taliban attacks on U.S. forces would have restarted and required yet another surge in U.S. troops.”

But other lawmakers were unmollified. Many moderate Democrats remained furious at the Biden administration for what they saw as terrible planning for the evacuation of Americans and their allies. Liberal Democrats who have long sought to end military engagements around the world still grumbled that the images out of Kabul were damaging their cause.

And Republicans who months ago cheered for former President Donald J. Trump’s even faster timetable to end U.S. military involvement in the nation’s longest war have shoved their previous encouragements aside to accuse Mr. Biden of humiliating the nation.

If Mr. Biden expected the bipartisan consensus on withdrawal from Afghanistan to protect him from criticism, he will most likely remain disappointed — at least for now.

“We didn’t need to be in this position; we didn’t need to be seeing these scenes at Kabul airport with our Afghan friends climbing a C-17,” said Representative Jason Crow, Democrat of Colorado and a former Army Ranger who served in Afghanistan. “We should have started this evacuation months ago.”

Representative Seth Moulton, Democrat of Massachusetts and a former captain in the Marine Corps, said that for months, he had been asking the administration to provide a refugee plan. “I was very explicit: ‘We need a plan. We need someone in charge,’” he said. “Honestly, we still haven’t really seen the plan.”

“They had weeks of opportunity. They had an amazing coalition of liberal and conservative lawmakers who were willing to support the administration in this effort,” Mr. Moulton, who serves on the Armed Services Committee, continued. “In my mind this was not just a national security mistake, but a political mistake, too.”

Mr. Biden’s televised address, in which he pledged not to expend more American lives “to fight on endlessly in another country’s civil war,” did assuage some Democrats.

“Thank you President Biden for learning from past mistakes and for clearly articulating the costs of endless war,” Representative Ilhan Omar, Democrat of Minnesota, said on Twitter.

The administration said the collapse of the Afghan government and the ensuing chaos were not indictments of U.S. policy but proof that the only way to forestall disaster would have been to ramp up the American troop presence. And answering critics who say the president was caught flat-footed, the talking points stated: “The administration knew that there was a distinct possibility that Kabul would fall to the Taliban. It was not an inevitability. It was a possibility.”

Representative Jake Auchincloss, Democrat of Massachusetts and a former Marine infantry officer who served in Helmand Province, argued that Mr. Biden’s only feasible options were to ramp up the American military footprint in Afghanistan as the deadline for withdrawal, agreed to by Mr. Trump, came and went — or to “finally tell the truth to the American people.”

“What I’ve been hearing” from constituents, he said in an interview, “is that what we’re seeing in Afghanistan is distressing, but that people appreciate the integrity of the president for highlighting that there’s no ending there. Twenty years was a long time to give Afghan leaders to plant the seed of civil society, and instead they planted only the seeds of corruption and incompetence.”

But privately, some liberal Democrats fretted that the images of chaos in Kabul would serve as a bludgeon for hawkish Republicans such as Senator Mitch McConnell of Kentucky, the minority leader, to wield against Democrats pressing to repeal authorizations for the use of military force passed in 1991 before the Persian Gulf war, in 2001 after the Sept. 11 attacks and in 2002 before the U.S. invasion of Iraq.

The Democratic left flank has been pushing for significant cuts in military spending and Defense Department engagements abroad and a reordering of government priorities toward anti-poverty, education and child welfare programs. But it must now contend with indelible images of the cost of U.S. disengagement.

“This is what we get, because we’ve been relying on hollow slogans like ‘Bring the troops home’ and ‘No more endless wars,’” Representative Daniel Crenshaw, Republican of Texas and a former member of the Navy SEALs, said on Monday on “Fox & Friends.”

Mr. McConnell, who had been unsparing during Mr. Trump’s administration in his disdain for the former president’s desire to fulfill his campaign promise to pull troops out of Afghanistan, said the nation’s enemies were “watching the embarrassment of a superpower laid low.”

“America’s two-decade involvement in Afghanistan has had many authors,” Mr. McConnell said. “So have the strategic missteps made along the way. But as the monumental collapse our own experts predicted unfolds in Kabul today, responsibility rests squarely on the shoulders of our current commander in chief.”

Few Republicans, however, were willing to allude to the role played by any of Mr. Biden’s predecessors — or to the fact that Mr. Trump had supported an even swifter withdrawal of troops from Afghanistan and had in April called ending the war “a wonderful and positive thing to do.”

Representative Andy Biggs, Republican of Arizona and the chairman of the hard-right House Freedom Caucus, said on Monday that Mr. Biden had abandoned “Trump’s peace plan & exit strategy & haphazardly created his own.” In February, Mr. Biggs had written to Mr. Biden imploring him to remove American troops from Afghanistan “in coming weeks.”

But in a sign that lawmakers believed that withdrawing from Afghanistan was still supported by many American voters — at least for the moment — even some famously hawkish Republicans refrained from condemning the decision itself.

“There’s a difference between the decision to withdraw and how that decision was executed,” Senator Tom Cotton, Republican of Arkansas, said on “Fox & Friends.”

“Whatever you think of the first decision, the execution by Joe Biden has been recklessly negligent,” he said, adding that “all” Mr. Biden “had to do, perhaps, was wait a few more months” to begin the withdrawal.

The political impact of the chaos and possible bloodshed in Afghanistan is far from clear, either in the midterm congressional elections next year or the 2024 presidential election. Mr. Trump sensed the political advantage of withdrawal when he signed a peace accord with the Taliban, and even invited Taliban leaders to Camp David before an anniversary of the Sept. 11 attacks, launched from Taliban-controlled Afghanistan. (The idea was quickly abandoned.)

Once the images from Kabul this week fade from television screens, relief that the war is over — at least for U.S. troops — could be the dominant emotional outcome.

Representative Ruben Gallego, Democrat of Arizona and a former Marine who served in Iraq, said in a long statement on Twitter that the American public had simply “stopped caring about Afghanistan years ago.”

AICC is trying to sort out the feud in Kerala after senior leaders Oommen Chandy and Ramesh Chennithala formally opposed the list of...
Read more