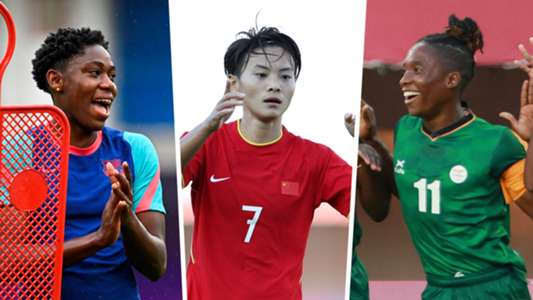 China lost on penalties to the U.S. women’s national team in the 1999 World Cup final. Now, it wants to close the gap to the rest of the world again

As Barbra Banda was netting back-to-back hat-tricks for Zambia at the Olympic Games this summer, a lot of people were heading to the internet to find out just who she was.

The 21-year-old is one of the most exciting strikers in the world, but she plays her club football in the relatively mysterious Chinese Women’s Super League (CWSL).

The men’s equivalent grabbed plenty of headlines back in 2012, with Didier Drogba, Nicolas Anelka and Frederic Kanoute all making their way to the Chinese Super League (CSL). Players such as Hulk, Oscar, Carlos Tevez and Alexandre Pato would later follow during an unprecedented era of spending.

The women’s league has made a similar splash, albeit without television cameras broadcasting its movements across the world.

Before the world-record fee Chelsea paid to sign Pernille Harder last summer, the most expensive transfer in women’s football history was Temwa Chawinga’s move to Wuhan. Just below on the list of the biggest deals of 2020 was Banda’s switch to Shanghai.

But while the aim for the CSL has been to establish China in the men’s game, the CWSL has the slightly different goal of re-establishing China’s place in women’s football.

Once upon a time, the country was among the elite, reaching the 1999 Women’s World Cup final and losing to the U.S. women’s national team only on penalties.

At the end of that tournament, the Golden Ball and Golden Boot awards both went to Sun Wen.

Today, Sun is the vice-chair of the Chinese Football Association (CFA), trying to restore the Steel Roses to their former glory after some disappointing years.

Chan Yuen Ting, head coach of China’s under-16 women’s team, is one of those who Sun has recruited to help make it happen.

The investment of “quite a lot of resources” into youth development is one way the CFA is pursuing its aims, with different competitions set up across the youth levels and beyond to create pathways.

Chan has also done a lot of analysis on the CWSL and its competitiveness has been increased by an influx of foreign players, limited at three per team.

Among the first big recruits were Cristiane, the all-time top goalscorer in Olympic history; Shirley Cruz, a two-time Champions League winner; and Asisat Oshoala, a treble-winner with Barcelona last season.

“The financial aspect of China is always very important,” Michael Kallback, who has worked as an agent in women’s football since 2014, tells Goal. “But also, of course, everybody’s interested in Chinese culture. It’s a very interesting country.

“I have seen a lot of games. When Kim [Bjoerkegren] and Elena [Sadiku] became the coaches of Beijing, I went and spent a month there with them.

“The Chinese players are good. They are not that tactically good, but they’re skilful and their physical attributes are very good. They’re not the strongest, but they can outrun probably anyone.”

The spending has calmed in recent years, but the money is still there, as are quality foreign players – just as Banda’s success shows. Stars from Africa and South America, especially Brazil, have thrived.

Ghana international Elizabeth Addo won four trophies with Jiangsu Suning in 2019. Not only did she help her family back home with her salary, but she was successful, developed in a new environment and enjoyed her spell.

“Our team-mates and the people were so nice,” she tells Goal. “They are kind to help you if you don’t understand something or you need help.”

But for all the investment and signings, there is still a huge gap between Europe and Asia that will not close overnight. That is the biggest challenge for a country like China.

“China gives a lot more money in terms of salary and they are developing football,” Addo, who is now back in Sweden with Djurgardens, says. “Europe is ahead of China, it doesn’t mean China is not good, but I think there are some things, in a professional way, where they are behind a little bit.”

“In China, they developed women’s professional football just a few years ago,” Chan explains. “The mindset is still between semi-professional and professional.”

China’s performance at the Olympics this summer was far away from the silver-medal performance of Sun Wen and her team-mates in 1996.

The Steel Roses finished bottom of their group, conceding 17 goals in three games. It showed the task at hand.

But players like Wang Shuang and Wang Shanshan showed the country has quality at its disposal. That three Chinese players have moved to Europe this summer is another indication of their quality and potential, with the most notable move being that of Tang Jiali to Tottenham.

“[China] has great players, not so much different compared to La Liga here,” Oshoala, the Nigeria international who played for Dalian Quanjian between 2017 and 2019, said earlier this year.

“The league might not be popular the way that La Liga is popular in Europe but, at the end of the day, there are great players, there are good teams.”

With a Women’s Champions League to begin in Asia in 2023, progress around the continent can help the country continue to build. Japan, the 2011 World Cup winners, will launch its first professional league next month, for example.

Europe’s progress didn’t come overnight, and nor will Asia’s. In China, there is investment at youth and senior level.

There is a legend, in Sun, at the top table in the CFA who “thinks very long-term for women’s football”, Chan says. There is also the continued benefit of top foreign signings.

The cash-fuelled attempts to push Chinese men’s football forward at great pace may have gone quiet, but it feels like there are genuine reasons for hope on the women’s side.